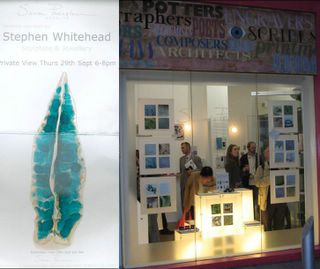 Susan, John, Liz, Ethan and I pottered down to the Custard Factory for Stephen Whitehead's new exhibition (on until 1st December). Being some of the first to arrive meant that we got lots of time to speak to Steve and were positively encouraged to pick up and 'foddle' his art. The piece on the flyer above is a broach but there were earrings, rings, cufflinks and larger pieces cast in bronze. These were very organic and we tried very hard to to think scientifically! When we'd had our fill of marvelling we went for a swift CAMRA ale in the Crown.
Posted by laughing snail at 11:17 pm No comments: Links to this post 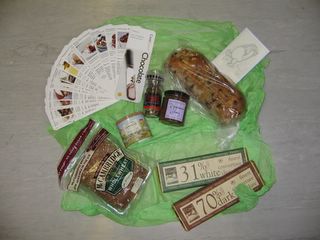 Great excitement has just swept into the room as I have received my parcel from Lilian of www.ifantabulous.com for Euro Blogging by Post. What fantastic goodies! Yummy looking chocolate - dark and white; Irish wholwheat bread; pear and walnut bread (homemade?); chutney; sea salt; and lastly a funky grinder with sundried tomatoes, black pepper, roasted garlic, olives, bell peppers, red onions, basil and wheatgrass!! And not to forget a book of chocolate recipes! WOW!!!! I shall have a busy weekend!
Posted by laughing snail at 4:11 pm 2 comments: Links to this post 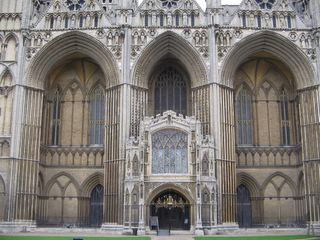 I had to go to Peterborough for a new passport and I also got to visit the magnificent Cathedral! Built in 972 it is spectacular and houses the tomb of Katherine of Aragon, first wife of Henry VIII, who must have been a tiny lady judging by the size of the covering stone.
Posted by laughing snail at 9:41 am No comments: Links to this post 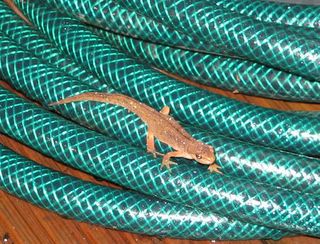 There was great excitement when I got home from climbing last night. It was raining but as I put Toulouse away I thought I should take out the rubbish for the bin men, in case they came early in the morning. And as I looked down at the hose by the base of the bin I found this little chappie! I was so surprised! A little research this morning and I suggest that it is a smooth newt. I am pleased to find they particularly like eating snails and I hope slugs, and shelter under logs in cold weather. I have a winter guest it seems.
Posted by laughing snail at 10:06 am 1 comment: Links to this post 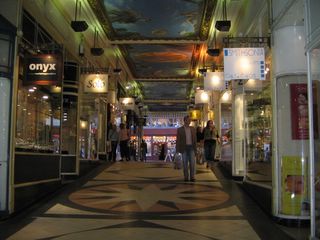 Yesterday, I couldn't quite believe it was September. It must have been nearly 20°C in my garden, with the sun beaming down. Having had a bit of a late start I pottered off to the shops to get an ingredient for EBBP (more of which later I hope). I cycle through Sparkbrook and Sparkhill nearly every day and had never found the time to stop and wander around the shops, what with either rushing to work or rushing home! I went to Medina Supermarket and though I had thought of the ingredient I wanted to buy I came away with something else entirely, such is the strength of my will.
From Sparkbrook into town, I went. I felt like a walk but didn't fancy taking a trip into the countryside. So I joined, for a little while, the masses doing their Saturday shopping. For IMBB this time we had been challenged to eat vegan, and not just for one meal. It was suggested by Sam of Becks and Posh to try and last a whole day. With this in mind I was trying out 24h as a vegan.
My walk took me up to Victoria Square and then along to the Piccadilly Arcade, one of my favourite places in the city. Not only has it got a selection of brilliant independent shops but the ceiling is decorated in a fabulous mural (can you have a mural on a ceiling?) that depicts life as seen from ground level (ie by our feet) upwards. Next I struggled through the crowds around the new Bullring and down to the Custard Factory. This is regularly described as the bohemian quarter (which complements at least a dozen 'quarters' in Birmingham!). A brief trip around the second hand books at Oxfam and then into a new gallery, where the owner was so friendly I was invited down to the opening of an exhibition on Thursday night! Tucked into one corner is Rooty Frooty. I can't say enough good things about this restaurant/cafe. I merely had an apple and carrot juice this time but they make fantastic vegetarian and vegan foods. Wandering back home I pondered what to make for IMBB. I had never cooked with tofu, so I thought as it is a staple of many a vegan diet that should be on the menu but may be add a twist.... And then I thought of all the things I normally eat that are incidentally vegan....lemony lentil soup, lentil bolognaise.....ah yes broccolli and peanut noodles. I love them and they are a cobbled together invention of my own so what better to cook. Elizabeth advised me to call into the Day In supermarket in the Chinese quarter for fresh bean curd. I had had it round at her house when we all went for hot pot, and I knew it was good.
Back home I looked up on the internet for a tofu based pudding and found chocolate mousse from the vegan society, and with a little modification to make it less heavy on the fat content I had a dinner fit for a king! So here are the recipes. I have thoroughly enjoyed my temporary veganism - breakfast was easy - toast with peanut butter and apricot jam, lunch pitta bread with hummus and salad. But I don't know if I could keep it up....no cakes, cookies, cheese...no leather shoes.....Nooooooooo! 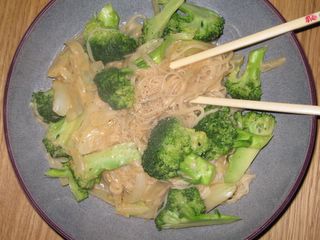 Ingredients for one:
as much broccolli as you think you can eat - I had about half a small head
1 tablespoon peanut butter mixed with enough water to make a think pouring sauce
chilli powder to taste
1 clove of garlic, crushed
one small onion sliced
one portion thin rice noodles
1 tablespoon olive oil

Fry the onion until soft then add the garlic. Put the noodles into a bowl with the broccolli and pour over boiling water, leave for 4 min. Then add the broccolli to the onion and garlic and fry off lightly. Add the peanut sauce and as much or as little chilli as you like. Then strain off the noodles and stir into the sauce. Season and serve. 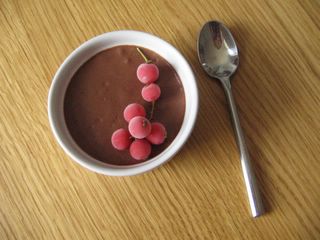 Melt the chocolate with the sugar and orange juice. The blitz with the tofu. I used a liquidizer, though the original recipe suggested a blender. It took a little time for the mixture to become smooth, though it was still a little grainy. Then I poured it into individual ramkins and out it in the fridge. Now I thought it wouldn't set but a couple of hours later it had a beautiful solidity, just like a non-vegan variety of mousse.

When I moved into my present house I had a downstairs bathroom for the first time. And it came with its own inhabitants: I occasionally see a couple of slaters. Well thats what I call them, though they are also known as bibble bugs, cheesy bugs, cud-worms, coffin-cutters, roly poly, monkey peas, penny pigs, sink-lice, sowbugs , tiggyhogs and fairy’s pigs. This latter one I like particularly! They are, of course, woodlice. I am intruiged by all these names. A little pole has thrown up the idea that 'slater' is a celtic word as my Scottish (or those of Scots lineage) and Irish friends also call them this. Tiggyhogs seems to be a Devonism. Whilst trawling the www in search of info I have found that there are many sites appreciating ye olde slater and even a few praising the little seen silverfish, which I am informed is comaparable in age to the Coelacanth!
Posted by laughing snail at 10:37 am No comments: Links to this post 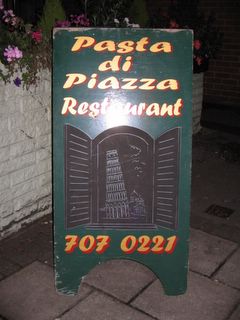 Yesterday Mum and Dad called in on their way back from Scotland, and after showing them the progress that has been made in the garden (I now, at long last, have both a fence and a source of water!), we went to the Italian restaurant in the village. It was a little quieter than last time, when live music was in full swing, but the dinner was very tasty none the less! Pizzas and the old main stay of Tiramisu filled a large gardening induced hole!
Posted by laughing snail at 10:00 am No comments: Links to this post 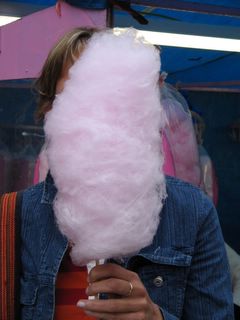 Here is Wampe celebrating the Stroud Fringe with some (very sticky) candy floss. This was shortly after listening to a couple of bands in the town on the Cornhill stage. Lots of flags were afluttering and though it was rather a driech day it was a very jolly atmosphere.
Posted by laughing snail at 8:37 pm No comments: Links to this post 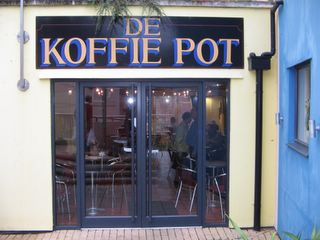 Wampe and I set out to visit Hay-on-Wye to peruse the second hand book shops there. On the way we called into Hereford as we had found out there was a rather nice shop that sold tasty morsels of a dutch nature, mostly from Albert Hein . We parked the car by the river and amazingly nearly fell into the shop - and how fabulous it was! At lunch we decided it was necessary to get a bag to keep things cold so went for a potter into the town centre. A painting and a pair of shoes later we strolled back to de Koffie Pot and bought nearly as much as we could carry. Needless to say it was by then far too wet and late to make it to Hay.........
Posted by laughing snail at 7:36 pm No comments: Links to this post 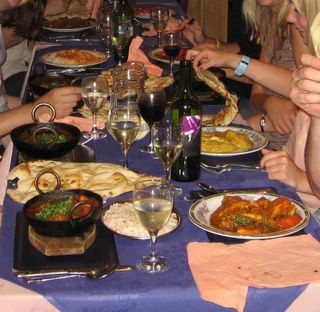 Today is a day for celebration as John has passed his viva and is now Dr. John! Hurrah - congratulations. The photo, by way of explanation, is the celebratory curry feast had after the event.
Posted by laughing snail at 8:41 pm No comments: Links to this post

Congratulations to Rod and Lotte

Email ThisBlogThis!Share to TwitterShare to FacebookShare to Pinterest
Labels: wedding

On Tuesday I was lucky enough to have an day off extra to the bank holiday. Susan, David and I zoomed up to Wales and pottered up Snowdon on the Rhydd Ddu path - the cloud burnt off as predicted by David and we had unrivalled views from the summit. And our treats for our efforts were fish and chips in Llangollen :) A fabulous outing and not a blister in sight, though my walking boots have now developed a crocodile smile, not a bad innings after 10years!
Posted by laughing snail at 3:23 pm No comments: Links to this post