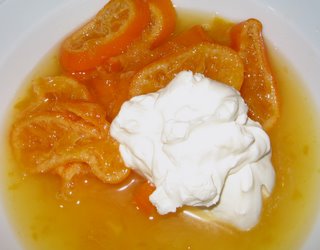 Our visitors on Christmas Eve brought us a beautiful mini-crate of clementines - with a wealth of citrus fruit already we wondered what to do with them. So whilst out at the supermarket we had a leaf through Arabesque and found a recipe for stewed oranges. Trying hard to memorize the recipe we bought the extra ingrdients and went home to tailor it to our clementines. So here is our version, served with Gran Marnier scented cream - though yoghurt might have been less rich.

Place the fruit slices and sugar in layers in a large pan, then add enough water to just about cover the fruit. Simmer gently for a couple of hours with the lid on. Then remove the fruit and rapidly boil the liquid to reduce by half. Add the fruit back in - it should be all soft and squidgy and simmer for a couple of minutes. Then bottle in sterilized jars.
Posted by laughing snail at 9:27 am No comments: Links to this post 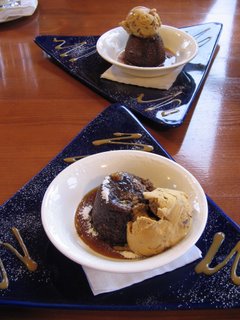 After a fabulously indulgent day yesterday, we all decided that the little stroll through the village last night was not enough and we had to experience a little more exertion. So this morning we donned our walking shoes and headed for Windsor to start the next leg of the Thames path - Mum and Dad have been beetling their way along this 180-odd mile pathway that goes from the Thames barrier to the source of the river in Wiltshire (or more conventionally the other way around). We fair zoomed down the flat riverside path, and there was I thinking 12miles was a long way having been used to such distances last on the Pennine Way with back pack, tent and all. We made it to Maidenhead by 12.30 and chanced upon the Blue River Cafe which was open and serving lunch. By then we had been rained on several times and feeling a little chilled huddled in the dining room while our wraps and soup arrived. The mushroom soup was scrumptious and there were equal peels of delight over the duck, crab or tandoori wraps. But, as per usual, the pudding was la piece de la résistance - sticky toffee pudding with caramel ice cream - yummy!!!! The ultimate three miles peeled away and soon we were back at the car - once again drenched to the skin. 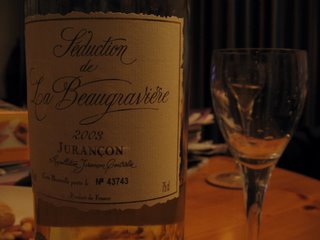 Back at the house, hot baths later Dougal was rummaging through boxes in the loft and came across a bottle of champers he'd been given for his 18th, which we were all sure had already been drunk - now 20years old (no D is not that old...yet) we were some what surprised, and even more so when it was found on sale on the internet at a considerable sum! Not that that is what is pictured above - this is Jurançon - with a nicely saucy name - that Dad found at Oddbins (not that I really want to tell you as I would quite happily never tell anyone so that we could buy it all - manic laughter in the background ....) "It is deliciously sweet wine for slurping... though you can have it with foie gras.... but slurping is good as it washes over you" says Dad. I couldn't sum it up better - delicious - go and buy it and slurp!!! (And if for some terrible reason you don't like it give it to me.....with the spiral eyes of hissing Sid..... (she's lost her marbles again)).
Posted by laughing snail at 8:22 pm No comments: Links to this post

Here are a couple of cracker jokes (from pre-Christmas day crackers) that I thought should be shared!

One:
What's white and fluffy and swings through the cake shop?


Two:
How do snails keep their shells shiny?

They use snail varnish

Merry Christmas!
Posted by laughing snail at 4:08 pm No comments: Links to this post

A day in the big smoke 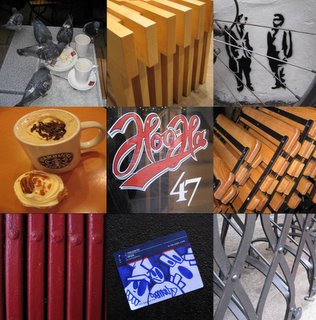 Posted by laughing snail at 7:28 pm No comments: Links to this post 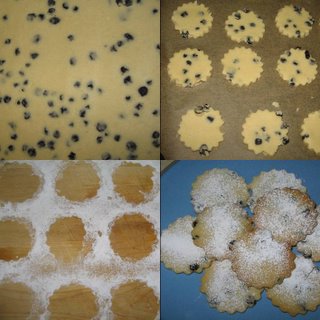 On Saturday for the first time I met a host of fellow food bloggers! My day started fairly early picking up Sabine of A Lot on My Plate, as it turns out she lives just around the corner from me! What a coincidence! We travelled down to London, via Wampe's, to visit Johanna the passionate cook. We were joined by Jeanne, Jenni, Celia, Joanna and Martina for a fabulous afternoon of chatter and food - what else!! Johanna got us warmed up with sausages & sauerkraut and then a cheese fondue - all exceedingly delicious. So much so that I forgot that I was having dinner with Mum and Dad and some how had to find room for an equally delicious duck and fig noodly number when I got home!

Above is my little contribution to the afternoon - we all made cookies (and of many varieties). Mine were adapted again from an Ocean Spray recipe - substituting dried blueberries for dried cranberries in a shortbread recipe. Next time I'll try the cranberries as the bluberries tasted rather like raisins and didn't turn the dough a lovely purple colour as I had anticipated.
Posted by laughing snail at 10:06 am 2 comments: Links to this post

Yesterday I evetually got round to visiting the Waterhall, part of Birmingham Museums and Art Gallery in the city centre, to see the woodblock printing exhibition of a selection of Chinese artists. The prints on display were produced between 1980 and 2000 and are representative of the more free approach to art in the post-Moa era. This is art for artsake and not for 'the people'. Particularly striking is the lead image, from the Muban Foundation collection, by Xiang Silou entitled Mother. Several of the prints eminate from the Heilongjiang province or the great northen wastes and these are particularly stunning images of great open landscapes. The exhibition runs until the 8th January.
Posted by laughing snail at 9:11 am 2 comments: Links to this post 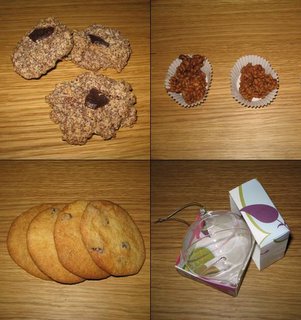 What excitement there was on Saturday - I had a chap in my kitchen who wanted to learn how to make cookies! John started off with the gingerbread cookies that I made for IMBB not so long ago and then proceeded on to make my Mum's Nana's chocolate crispies (that would be my greatgrandmother's recipe!), which are incredibly easy to make and even easier to eat!! Then we had a go at a recipe from the chocolate book that Lilian sent me for EBBP - chocolate macaroons! Finally I adapted a cookie recipe from Ocean Spray - Cranberry Ginger Drop Cookies - I omitted the pecans and glaze, as I didn't have the ingredients in the cupboard. We split the spoils and he took most home to be sampled by his family!
Posted by laughing snail at 9:18 am No comments: Links to this post 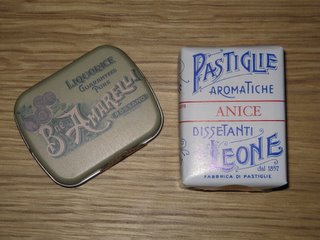 On our last outing in Rome we popped down to Rosati's in Piazza del Popolo for a swift cappucino. On the way out I bought these two little packets of tasty treats - pure liquorice from Amarelli and aniseed digestives from Pastiglie Leone. Both are very good, though I have to admit that anything liquoricey or aniseedy is right up my street. The pure liquorice is quite astringent whereas the aniseed lozenges are sweet and crunchy.
I was intruiged to see that there is a liquorice museum on the Amarelli website - somewhere to put on my list of places to visit - I wonder if they have liquorice products from around the world, my house can currently claim to be harbouring liquorice sweets from Holland, Norway, Italy and England!
And on the Pastiglie Leone site I was very excited to see that they have made special editions for the upcoming XXth Winter Olympics . Now I wonder howe I can get my sticky mits on some of those to taste............
Posted by laughing snail at 11:01 am No comments: Links to this post 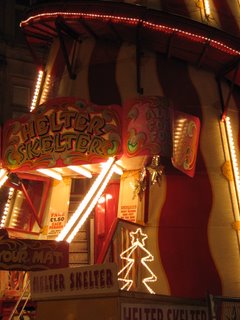 Posted by laughing snail at 10:59 am No comments: Links to this post 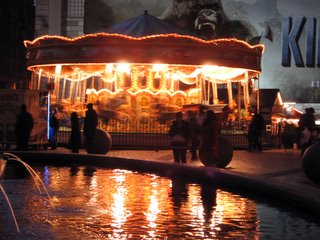 Posted by laughing snail at 9:04 am No comments: Links to this post 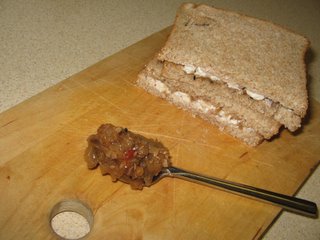 A picture of my lunch - thats not very exciting I hear you cry! But it is what is alongside the cottage cheese in my sarnie that I want to draw your attention to - aubergine and garlic chutney from Farm Chef. Mum bought a jar for me at a craft fair. And very delicious it is too - plenty of flavour and no harsh garlicy overtones - which is good as I share an office at my new job. Whats best is the inclusion of not only nutty seseme seeds but also onion seeds. Those are the tasty little black seeds which give naan bread its distinctive flavour!
Posted by laughing snail at 10:52 am No comments: Links to this post 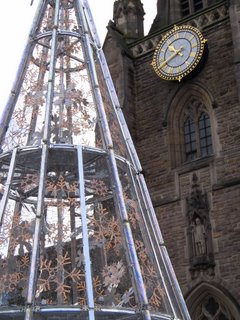 This year in the city centre, not only do we have the regular markets and the Frankfurt Christmas market (which must now be in its 4th or 5th year) but we also have a place for the local crafts traders down in St Martins Square! I popped into town for a little potter last Friday and bought some chocolate coated gingerbread - yummy, and later on found myself at the Gluwein stand in the rain - great stuff, though they were a bit heavy handed with the raspberry liquor! I am reliably informed that the crepes are good again this year. The very first year the German market came to Brum I remember driving home one night and seeing two halves of a giant Father Christmas proceeding down the road on a low loader. What could it be? It turned out to be the housing for the crepe stand!
Posted by laughing snail at 10:34 am No comments: Links to this post