I've just got in from the most hilarious evening. Sally, Naomi and I had a trip to the theatre - first dining at the Green Room - and then settling into our seats at the Hippodrome for Acorn Antiques The Musical!!! It was just divine!!! We might not have had the big big stars that first put it on with Victoria Wood but our cast was spot on! Mrs O and her girls were hilarious from start to finish - when we were invited to donate to a charity of Biiirrrmingham and the Black Coun-tray in a faultless brummy accent that went down a storm in the Hip!! Bravo!!!! Who would have known that macaroons were a midlands thing!!! Go and see it if there are any tickets to be had!
Posted by laughing snail at 11:00 pm No comments: Links to this post

Waiter there's something in my pie! 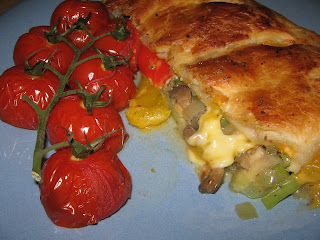 I was cycling home today in the sunshine thinking what shall I have for tea? when I thought of something we used to cook as students. Mel and I used to cook together and made delights such as bolognese risotto and sausage plait, though I seem to remember lots of lentils too and one fateful outing of fruity mince, never again. It was the plait that inspired me today - I thought instead of sausage I would put in lots of delicious vegies and some tangy cheese. So here we have it an experimental vegie plait that I shall name Mels' plait!

First put on the oven at 220°C and once hot roast the peppers for 30min. Once they're done take them out and put them in a bowl and cover with clingfilm or foil for 5min. Then peel and remove all the seeds etc and cut into four pieces each. Then make a simple houmus with 3/4 the chickpeas, garlic, peanut butter and enough water to make the liquidiser go round. Taste and season with salt and pepper. Heat the oil in a pan and fry off the onions until transparent and then add the mushrooms and leek and fry until soft and dry. Stir in herbs of your choice - about 1 teaspoon of fresh thyme is good. Roll out the pastry until about 3mm thick, place on a greased baking sheet and then on one half cover with the spinach leaves leaving a border of about 2cm all around (so at this point it looks like a book with just one page covered in green and the other page is blank). On top of the spinach layer the houmus and scatter over the remaining chickpeas. On top of this layer the mushroom mixture and then tear up the mozzarella and spread over as evenly as possible. Then layer over the peppers and finely crumble or finely slice the cheese and layer over the peppers. Brush the 2cm pastry border with milk. Finally take your blank 'page' of pastry over the top and stick down using the back of a fork. Brush the top with milk and cut 8 slits in the top layer of pastry. Cook in your 220°C oven for 20min, until golden brown. And if you'd like to have roasted tomatoes with it put them into the oven too. This will serve 4-6.

I know there's no plaiting here but if you felt inspired you could centre the layers instead of having them all on one side and then plait the pastry from each side - v complicated to explain but easy enough to do.
Posted by laughing snail at 7:05 pm 1 comment: Links to this post 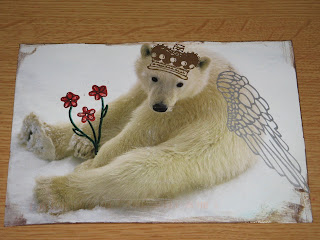 What timing! This gorgeous postcard arrived in the post yesterday in time for Valentine's Day all the way from Rachel in Florida. Rachel has a great blog and hand made this card just for me - thanks! And thanks to Meeta for organising the event - bring a little bit of joy into all our lives.
Posted by laughing snail at 12:56 pm No comments: Links to this post 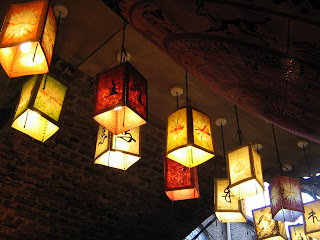 Wampe and I have been planning on taking a trip down to Camden for what seems like forever and on Saturday we actually made it there! (I was particularly excited that I managed to get to London for £5 on Chiltern Railways phone ticket!!) I was quite surprised to see such a vibrant place as we came out of the tube - so much life going on. We wandered down to Camden Locks and pottered about, trying exceptionally hard not to spend all our money in the first ten minutes. Whilst contemplating our purchasing opportunities we supped a little mulled wine and nibbled absolutely heavenly spring rolls down by the canal. Then winding our way under the arches Wampe succumbed to the first purchase of the day and after a good browse I too purchased (and now have a new project looking into the history of toothpaste!). We finished off our trip with crepes from a very chatty Frenchman down by the canal again. 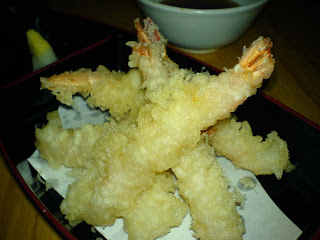 We were fairly pooped by this point and then made our way home. After a cup of tea we felt restored and readied ourselves for an evening out with Mum and Dad at the newish Japanese restaurant in Cobham - Roko. The atmosphere was buzzing as we arrived to see the chef flame the tepanyaki surface! We perused the menu and settled on a selection of starters - gyoza, chicken yakatori and heavenly scallops with mangetout, sushi and tempura - prawns, soft shelled crab, monkfish and vegies, along with some garlic fried rice and spinach. Everything was perfection itself - crunchy tempura, the freshest sushi. And at the end we had to have desert even if we didn't have the moose and coulees!! I'd really recommend this place for the great food, atmosphere and brilliant staff. 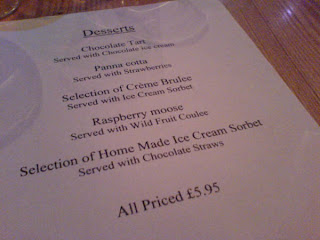 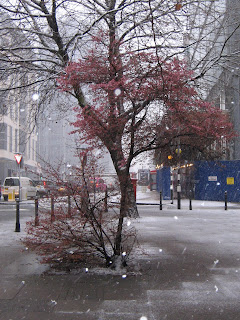 Do you remember this tree from last April ? Well its flowering in February this year - I don't think it knows whether its coming or going with the hot weather we had and now the snow - and here is a little friend from my garden! Those white blobs that look like they are flying towards the wee snowman are in fact snow flakes! 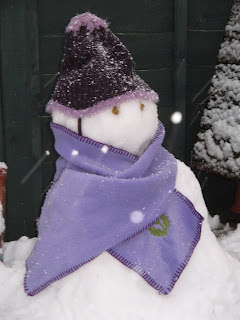 Posted by laughing snail at 5:00 pm No comments: Links to this post

Email ThisBlogThis!Share to TwitterShare to FacebookShare to Pinterest
Labels: flowers 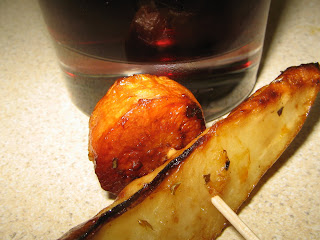 Stephanie over at Dispensing Happiness is hosting the next blog party for comfort food. For me I like hot-out of the oven-wholesome foods that act like a big duvet, so for my comfort food on a stick (so to say) I have made roasted carrots and jacket wedges. And they're really easy to make just cut up carrots into 3/4inch rings and potatoes into wedges (about 8 per potato though it depends on how big your spuds are - mine usually fit comfortably in my hand). Put them into a roast pan with a little olive oil and some herbs (rosemary, thyme....whatever you like) and then roast for 45min at 180°C until the vegies are soft and caramelizing round the edges (yes, thats the posh way of saying burning a bit). If you want a dip mayonaise is really great but I also drop 4 or 5 cloves of garlic still in their skins into the roasting pan and then squeeze out the garlic flesh and mash it with the mayo. And to drink? A nice glass of port, also warming and goes really well with the mellow garlic flavours. I actually made a whole batchfull of these little delights for dinner and felt great curled up on my sofa, as the snow drifted down, dunking and sipping!!
Posted by laughing snail at 1:41 pm 1 comment: Links to this post

Ah Nutella glorious Nutella - better than anything - good on a spoon, on toast, in a pancake or my personal favorite in yoghurt! Over at Ms Adventures in Italy and At home in Rome the 6th February has been designated World Nutella day - fabulous! I wanted to write a poem, an ode to the best thing since sliced bread but only managed three lines

but sadly never got past the opening of the jar - specially bought to revel in the occasion. Alas once open I found myself eating the Nutella, that magic taste that cannot be recreated by non-Nutella chocolate-hazelnut spreads. So lets raise a glass of chilled milk to the most scrumptious, one in the world - Nutella!

PS If you have any ideas for the poem please jot them down in the comments!
Posted by laughing snail at 8:29 pm 1 comment: Links to this post