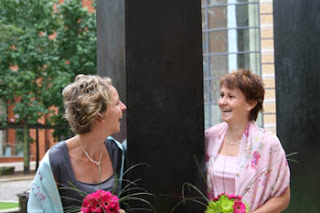 My excitement had been building all week, many people were about to descend upon our little street in Kings Norton for Sarah and Juuls's big day! After torrential rain on Friday I eagerly pull back the curtains on Saturday and saw sunshine! Fantastic! Our first port of call in the morning was to Bank to finish off setting up the tables and then a quiet stroll over to the register office with a few phtotos along the way. Then time seemed to accelerate through the ceremony, Cecile (Juul's cousin) played her clarinet beautifully, Jet read a wonderful poem. Sandwiched between two massive wedding parties we had a few photos in the garden, but more outside the Ikon. Lunch at Bank with a few elegant speaches completed our stay in town and then back for a wee party in the 'party garage' and garden! Wonderful!
Posted by laughing snail at 6:28 pm No comments: Links to this post

Email ThisBlogThis!Share to TwitterShare to FacebookShare to Pinterest
Labels: wedding

The fantastic chocolate festival in Zutphen was on Sunday! We could hardly believe the numbers of people in town for this - there were demonstrations on how to make chocolates, chocolate sculptures and plenty of things to taste!
Posted by laughing snail at 12:10 pm No comments: Links to this post

Beautiful Zutphen in the autumn sunshine!
Posted by laughing snail at 12:04 pm No comments: Links to this post 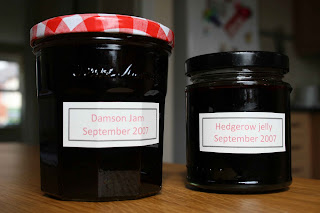 ....well nearly anyway! Having gathered all my fruit I just had to decide what to make with them all. I have a book called Fruits of the Hedgerow by Charlotte Popescu and I leafed through this and decided first of all to make some damson jam and hedgerow jelly. I also made some sloe gin (in a 1litre kilner jar put 225g sloes that have been pricked with a fork, 125g sugar and 70cl of gin, seal and leave in a dark place for 3months) but this will only be ready later in the year.

Damson Jam
1kg damsons
450ml water
1.35kg granulated sugar
juice of a lemon
Wash your jam jars and lids and place the jars into a 100°C oven. Wash the damsons and then put them in a large heavy based saucepan. Add the water and bring to simmering and simmer for 30 min. Leave to cool and then try and find all the stones. You could leave then in and remove them once the jam has reached setting temperature as the will float up to the top at this point but I find it easier to remove them now. Then add the sugar and lemon juice and bring to the boil. Stirring occasionally to stop the fruit sticking and burning on the bottom of the pan boil until it reaches setting point. To test this have a plate in the fridge. Put a little of the boiling jam on to this and then place back into the fridge for a few minutes. If its set or if it forms a crust then the jam is ready for bottling. Turn off the heat and allow the jam to collapse back into the pan, skim off and scum (its just the protein that's in the fruit nothing to be alarmed about) and ladle into the hot jars. Seal whilst hot and then leave to cool.

Hedgerow jelly
450g haws (the fruit from the hawthorn tree)
450g crab apples
450g elderberries
a handful of rosehips
water
granulated sugar
juice of a lemon
Remove all the stalks from the fruit and rinse to remove any bugs of dried bits of flower petal from the fruit. Put all the fruit in a sauce pan and cover with water. Bring to simmering and simmer until all the fruit is soft, crushing the fruit on the side of the pan. Then strain through a muslin cloth into a bowl, overnight. Discard the pulp and measure the juice. Put the liquid in a pan with 450g sugar for every 600ml juice. (I had about 900ml juice and so needed about 700g sugar) Add the lemon juice and bring the mixture to the boil, dissolving all the sugar. Boil rapidly until setting point is reached (see above) and then bottle in prepared jars (also detailed above).
Posted by laughing snail at 12:56 pm 1 comment: Links to this post This is my 'haul' from the canalside yesteday when I went a-picking! Nearly 5kg fruit and a few hazelnuts. I found a whole field of sloes so there will be sloe gin and lots of jam. Watch this space!
Posted by laughing snail at 4:29 pm No comments: Links to this post 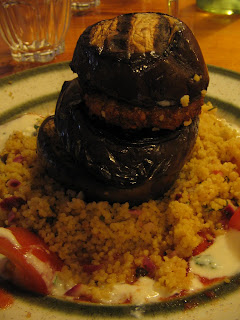 Liz and Ethan intited a whole crowd of us along to the Warehouse Cafe on Allison Street on Saturday lunch time for a celebration with vegetarian and vegan food. The cafe is upstairs from the Friends of the Earth Shop so it was a little like going up to a friend's sitting room clambering up the stairs in the old victorian terrace house. And the place was hopping - we took the centre of the restaurant on several tables and generally enjoyed ourselves whileeverything was cooked up! The policy is to bring your own wine which we did, and cava and beers! The food was fabulous - for me an aubergine and chickpea fritter stack on a bed of couscous with youghurt dressing followed by a vegan cheesecake with strawberries. Fantastic, it was nearly 6 by the time we dragged ourselves away. 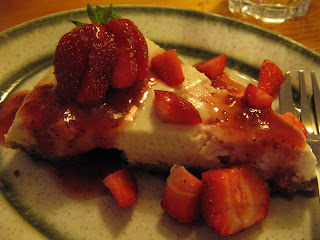