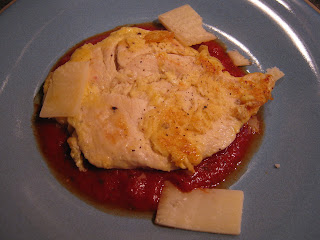 A little while ago I was contacted by Ronja from Pitaya Media to review their newest application for the iPhone, so with iPhone in hand I downloaded Parik's Easy Cooking. Brwsing thorugh the recipes I saw that they were divided into various catergories and levles of cooking skill (easy to advanced). They sll looked like they were quite quick too, so I pottered off to the supermarket and bought the ingredients for Cheesy Chicken Schnitzel - chicken, eggs, parmesan cheese, butter, oil and tomato sauce. It was easy to butterfly the chicken breasts and dregde them in a cheese egg mixture, but not so much stuck to my chicken, so I had a cheesy omlete too, by frying everything off in the oild and butter. The tomato sauce warmed in a separate pan and soon it was time to serve. We had made a potato salad with chives, pepper and celery to go with the chicken. It was tasty and easy to cook, and there are plenty more to try, though I'm not too sure about chocolate noodles, but hey, why not try it!
Posted by laughing snail at 8:00 pm 1 comment: Links to this post 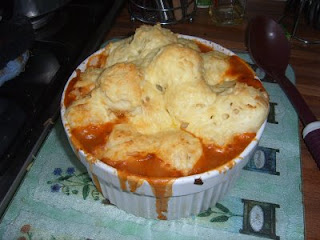 'I promised Mel I’d do the foovolution (sounds like a kylie song!) in July and after trying very hard to come up with something exciting I failed and went for a variation on ‘Sheppard’s pie’ as that is what the ingredients screamed at me. (Can’t help it I’m just not good at savoury, cake I can do but savoury usually get a ‘well it’s edible’ response from he who does the shopping). So ‘Turkey herder pie was made on Saturday with the help (and I use this in the loosest sense of the word) of boy and girl. Mince featured in March and April and made a come back in the form of turkey mince influenced by the fact that I don’t eat mammals (it’s a dissection room thing!). So while the kids ‘cooked’ pasta for mummy’s dinner (e.g. chucked half a pack of dried pasta around the floor with diggers!) I proceeded to create tea. I think most things used have appeared before but this time they have ‘de-volved’ into a simpler form.

• New potatoes (bigish one bort by mistake by he who does the shopping) were cut up and put on to boil in their skins. (I could claim some sort of added fibre benefit but I just couldn’t be bothered to do any peeling!)
• Olive oil put in a pan and diced onion added to soften.
• 1 clove chopped garlic added
• Sliced carrot, courgette and diced yellow pepper and aubergine added. (Boy said yuk to every thing but the carrot and returned to his pasta)
• Pinch or 3 of mixed herbs added (Athenian mix)
• When all veges soft (ish) they were transferred to a waiting dish.
• More olive oil added to pan
• Minced turkey put in pan with 2-3 teaspoons of bisto best chicken. (paper from the bottom of the turkey mince also added as girl was wedging herself between my legs at the time.)
• Paper removed!
• When turkey cooked the veges were returned to the pan
• 1 tin chopped tomatoes and 1 teaspoon of smooth peanut butter were added.
• This was mixed well and put into an oven proof dish.
• When the potatoes were cooked they were drained and mashed with milk and a knob of butter.
• The potatoes were then put on top of the turkey and vege mixture using an ice-cream scoop. (boy will only eat mashed potatoes if they are in ‘scoops’.
• This was covered in cheddar (the mildest and most bland white cheddar available to mankind – boy will only eat this sort!)
• They whole thing was put in the oven (~200 degrees) till the top went brown and it was bubbling
• Served with cranberry ‘red’ jelly.

He who does the shopping said it was quite nice (which is praise indeed). The kids were less impressed, but then anything that isn’t chocolate or spaghetti hoops usually fails to impress them. Girl tried it but started to fling turkey chunks around the room. Boy did eat the cheese covered potato and red jelly. He tried a carrot but pulled the ‘yuk’ face, at least he tried it! I though it was fine. And so on to the next person………'

Posted by laughing snail at 11:25 am No comments: Links to this post

The Tower of Time 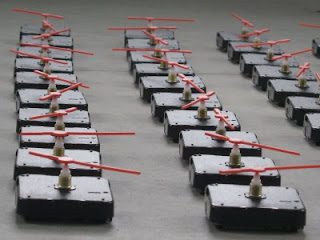 This afternoon we popped down to Perrott's Folly, near Edgbaston Reservoir. Its the last day of Yukio Fujimoto's Offsite installation for the Ikon gallery. He has installed 1111 clocks within the tower (which may be one of the towers that Tolkien used as inspiration for his Lord of the Rings trilogy). On the first floor just one clock sits on the floor ticking very quietly away, then up the circular stairs again and there are ten in a row, and you can hear them quite well, then up another revolution and there are one hundred in a square and there is a rhythm to the ticking. Finally on the last floor there are one thousand clocks. There's a holding room on the floor below as there's only space for a couple of people to stand in the room with the clocks now, and as you come out of the holding room and start up the stairs it sounds like its raining quite hard upstairs. This last room is also the most beautiful room, with decaying splendor and plaster reliefs on the ceiling. The clocks cover every surface and form a 'white noise', its harder to decipher any rhythm too. Great stuff, I recommend you go and see it, but they shut at 5, so you have about two and a half hours!
Posted by laughing snail at 2:18 pm No comments: Links to this post

A new restaurant opened about a month ago, just down the road from us, La Banca in Cotteridge. I went with work a week ago, and thought it would be a good place to go with Mum and Dad, so we walked down to have dinner last night. The building used to be a Barclays bank and has be tastefully turned into a restaurant, retaining the old safes as features. When we got there it was already quite busy and so we were ushered upstairs to our reserved table. This smaller dining room felt quite private, and a million miles away from the hub that is Cotteridge with all the buses going by outside. Dad ordered us some very tasty wines (La Joya sauvignon blanc and a Verramonte Merlot) and we all had different dishes. I started with the Gigante pasta filled with ricotta and chard in a tomatoey sauce, then a very tender rib-eye steak with pepper sauce and finally a light tasty tiramisu. Great stuff, I recommend you have a try, and I hope they will continue the way they have started, with friendly waiting staff and lots of good reasonably priced food.
Posted by laughing snail at 3:27 pm No comments: Links to this post 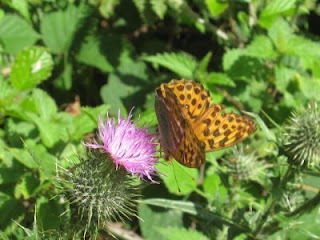 Dad has a book called Living Britain and having enjoyed our trip to Thursley common we had a look in the book and found various places to visit near Brum. So our first outing was to a Worcestershire Wildlife Nature Reserve at Chaddesley Woods. As soon as we arrived we could see there were lots of butterflies and we could hear lots of birds. Walking through the reserve we saw long tailed tits, buzzards and butterflies of many kinds, including the sliver filigree, which we were told by the passing butterfly surveyor is the biggest in Britain. What a super outing, and then we had lunch at the Jinney Ring too.
Posted by laughing snail at 2:34 pm No comments: Links to this post

Email ThisBlogThis!Share to TwitterShare to FacebookShare to Pinterest
Labels: flowers

Last Friday Nick and I went off to the Hampton Cort Palace flower show, enjoying the recycled orange juice cartons as plant pots and more, then on Saturday it was off to the Summer exhibition and Tas , a Turkish restaurant, before The Winter's Tale at the Old Vic. None of us new the story so it was all a wonderful surprise and the setting was beautiful - lots of candle lanterns for the palace. Then on Sunday we went to Thursley Nature Reserve to see the multitude of sundews that they have! What a weekend!
Posted by laughing snail at 11:19 am No comments: Links to this post 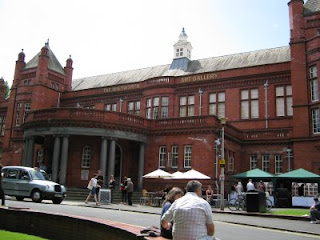 This little film is a time lapse of photos taken every minute over a 3hour period of the area where the hedgehogs are living in Sarah and Juul's garden. I tried to bait the area with a slug found trying its best to demolish some tomato plants, but it had other ideas and is seen speeding away at the start of the movie, the little hedgies are in there too, the best shot is right near the end! 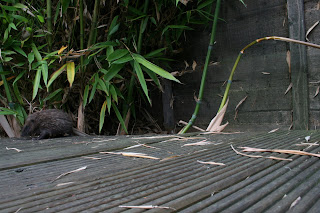