Whisk the egg whites until stiff and then whisk in the salt and sugar. Stir in the zest and essences and finally stir in the almonds to make a stiff paste. Divide into 32 balls, or more traditionally diamond shapes, and lay on a baking sheet. Either leave over night to harden or place in a recently used oven with the door open, for a hour or two. Then bake at 140°C for 30min until just colouring. Sprinkle with icing sugar. Recipe from Nigella's How to be a Domestic goddess.
Posted by laughing snail at 1:02 pm No comments: Links to this post

Email ThisBlogThis!Share to TwitterShare to FacebookShare to Pinterest
Labels: cake, cooking
Today is Ada Lovelace Day
Posted by laughing snail at 9:11 am 1 comment: Links to this post

Email ThisBlogThis!Share to TwitterShare to FacebookShare to Pinterest
Labels: science 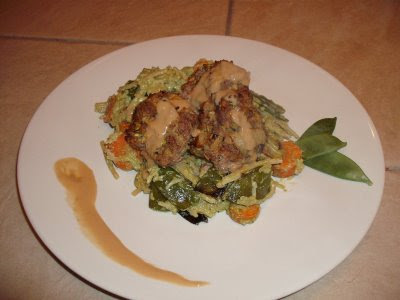 The March evolution comes from Naomi:

"In the true evolution spirit I present the next fossil in our collection, on reflection this is a bit like the Cambrian where we see a new life born from a previous ancestor that seems to bare no resemblance!

Mince beef (as much as you like / veggie mince can be substituted)
3 Bashed crackers
A small egg (1/2 is better)
Few (5)spinach leaves
A slosh of soya cream
5 Hazelnuts
3 Mushroom
Mange-tout (handful)
Spaghetti – replacing the wraps!

Using the Onion, garlic, courgette, carrot, salt and pepper; with a little oil from the previous evolutionary fossil, I whizzed them all up in a food processor with the grating blade attached. Tipping the mixture into a bowl add mince beef, bashed crackers and a small egg. I combined all these ingredients with a spoon then using my hands I made 8 medium balls. Placing them carefully in a Pyrex dish lightly oiled and with a lid I put them in the oven at 200°C (not sure my oven temp is accurate but needs to be fairly hot but not enough to burn them!)

The balls were turned after 20min and the lid removed to let them crisp and harden a little. They were left for a further 25-35 min to cook fully.

In the “incubation” periods I used the garlic, cream cheese (ricotta and quark), olive oil, chilli oil and basil with the addition of a few spinach leaves, a slosh of soya cream and hazelnuts to make the pesto (whizzed in a mini blender). I also chopped up the rest of the courgette, carrot and added some mushroom and mange-tout; these were roasted and added to the pasta later.

The spaghetti was cooked when needed as directed by the packet; I used gluten free pasta because that is what we have in the house.

I placed the meatballs on top and voila – my evolution creation!

Although there appears to be lots of new ingredients I only used a very small amount of each – Natural selection prevailed because that’s what I had in the fridge! (in the pic there is a sauce which was just for decoration! But it’s from Ikea)"
Posted by laughing snail at 10:03 am 1 comment: Links to this post

From Dad and the FT! 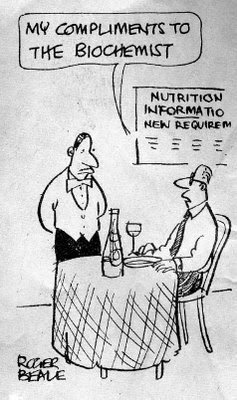 Posted by laughing snail at 10:04 am No comments: Links to this post