Apologies for the loud breathing sounds!
Posted by laughing snail at 10:34 am 1 comment: Links to this post 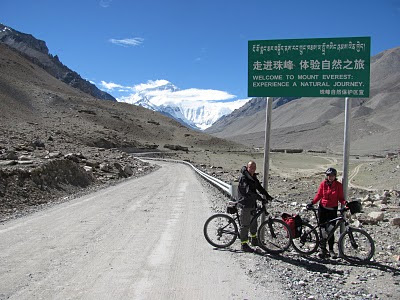 I can't believe we're back in Kathmandu again. After leaving Shigatse we cycled out into the countryside (and I got a puncture from a wayward piece of glass in the road) for many nights of camping. We rejoined the main road after taking the southern and quieter road to Shigatse, but it didn't make too much difference as the road heads straight to Everest Base Camp and the border so wasn't too busy. There were plenty of Tibetan villages to cycle through to start with but they got sparser the further we went. A few days in we took the turning towards Everest Base Camp over the Pang La. The road was the only untarred one we took in Tibet, and boy it was bad - lots of pot holes and corrugations. Nick and I managed 10km up the pass, through sticky mud and rain before calling it a day. Then at the top we stopped to look out on the view - a bit cloudy but there were lots of ammonites to distract us! On the way down the road was still bad and I managed to catch an edge in a rut and fell off the bike into one of the large concrete bollards, thankfully otherwise I would have been off the edge. A bit rattled I tried to reattach the rear wheel, that had come off, and didn't quite manage it, so I was happy when the minivan scooped me up and ferried me to the camp where Doug easily fixed it! Must have been the shock. The following day we rode up to Everest Base Camp, which had stunning views but it was a little bit weird. There were lots of yak hair tents set out in a big rectangle (like around a football pitch) and each proclaimed to be a hotel - my favourite was the 'Metal Yak Grand Hotel'!!!

As the exit road was out (landslide) we made it back to the tarmac where we had turned off a few days before and cycled through Tingri, again with stunning views of Everest and Choy Oyu. That night we camped next to a local inn and got the chance to pop in for a nosey and a beer - it was a real highlight to see how the people where living. Unfortunately the town was full of dogs that howled all through the night! Onwards and we only had two passes left and I happily made it up both of them and through the headwind on the otherside. We caught sight of Shishipangma too! We camped at the top of the gorge leading to Nyalam, and even visited the town for a hot shower, the first in a week! Then we started the 160km descent to Nepal. We swooped down the mountain and into the mist, which made it pretty treacherous! I must have made it all the way through one set of brake blocks! Near the border were a couple of dodgy little towns and then we were having our passports checked 3 times to leave China! We said goodbye to Goncho, our Tibetan guide, and headed to a little hostelry for lunch on the Nepalese side. We made a decision to cycle to The Last Resort for the night. The road was abysmal, as were the dogs that chased us! We went over several landslides, dragging our bikes through the mud! We did it again the following morning but they petered out by lunch time as we continued to descend. But after lunch we cycled through the heat of the day and I was rather unwell with lack of salt, 6 rehydration salts packets later and all was well again. Nick made it up the final climb to Dhulikel, where we spent the night. This morning we cycled the last 30km into Kathmandu, the traffic was terrible, as was the road surface. Just as well we were all on mountain bikes! And so we're back in the Holy Himalaya Hotel, in reach of good food and the Internet again, having cycled 622miles!
Posted by laughing snail at 11:51 am 4 comments: Links to this post 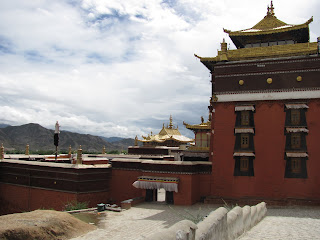 Today has been our rest day and so we spent a lot of time doing not a lot and then some time cleaning and taking care of the bicycles, before wandering down to the Tashi Lungpo Monastery, which is the home of the Panchen Lamas. There were several monks about and a few pilgrims, but mostly tourists again. I reflected that I don't feel like I've got under the skin of Tibet at all yet. Though last night we ended up at the Yak's Head Tibetan Restaurant, where much sign language and pointing were required to get something to eat. We had momos, knuckle stew, soup and even yak cheese and homemade pasta (which was really vile!). It was the most hilarious evening and I hope we provided some entertainment for the local people in the restaurant too, as we laughed away the evening, drinking beer from shot glasses (which seems to be the norm). What the next 10days will bring, save massive passes, I don't know, I'll let you know when we get to Kathmandu!
Posted by laughing snail at 10:10 am 1 comment: Links to this post

Last night I had Tibetan curry for dinner - yak meat and potatoes in a fragrant spicy sauce, very yummy. We tried to get momos (really yummy dumplings) but they had sold out! This morning we eschewed the hotel restarant and headed back to the Yak Western restaurant for chocolate pancakes! Then it was a fairly straight forward 90km down to Shigatse, it has been the first really hot and sunny day and many people were out in the fields collecting in the harvest. Surprisingly they left their shoes by the road and did the harvest in bare feet. Needless to say there were plenty of hellos and high fives! We cycled through wide open plains, with what looked like aluvial fans coming down from the mountains, but no glaciers. We cruised into Shigatse at around 12.00 which was a bit early, we could proabaly have taken a bit longer to cycle and have had longer banana stops. But the Manasarovar Hotel was a welcome sight with its baths and even oxygen machines next to the beds!! After showers and a little washing Nick and I went out to see what we could find. We wandered through one of the Tibetan markets full of load speakers and non-touristy useful stuff, like shirts and soap. Then back to the hotel to cool down, having an ice cream along the way.
Posted by laughing snail at 10:06 am 2 comments: Links to this post 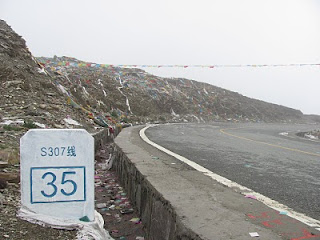 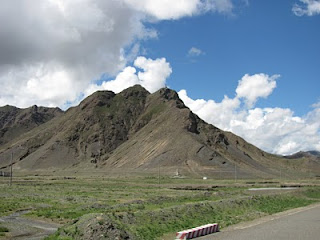 Here are a couple of photos from the trip - the to of the Khamba La pass and the riding today, across a large open plain.
Posted by laughing snail at 9:53 am No comments: Links to this post

We also saw some birds that looked like whoopoos - could they be or are they woodpeckers? And some sparrow like birds that had dark pink fronts - any suggestions? And lots of grebes
Posted by laughing snail at 10:46 am 2 comments: Links to this post

We left Lhasa in glorious sunshine, pottering up for a team shot outside the Potala Palace where we became a tourist attraction ourselves as the Chinese tourists joining us for pictures! Then came our first full day of cycling (90km) up to the bottom of the Khamba La pass. It was interesting cycling lots to see and lots of traffic to keep an eye on. There were several large Buddhas painted on the side of the rocks and the river rushed by threatening to burst its banks. We camped in what looked like a farmers field but right next to the road, so when the lorries laboured by in the night they made a lot of noisy. It was sunny til about 6 and then there was an almighty thunderstorm, and this pattern has been followed every afternoon. It stopped in the night (except last night!) and then was gloomy in the morning. We started early to climb 1200m over 35km (or in 30 km as I thought!). I struggled for breath from the start and at 29km got off my bike wanting to lie down and catch my breath but I struggled on on foot for another 2 km til the minivan found me and very thankfully scooped me up and took me to the top of the pass. All the others had made it! the view down to Scorpion Lake was spectacular - turquoise waters and green mountains. We raced down the other side, with a splitting headache from the altitude that made its presence known over every little bump. After a few kms we stopped for lunch and I opted to take the minivan the last 30km to the campsite where I happily had a lie down and a diamox.
The following day we set off again to cycle over Karo La - a shorter ascent but to over 5000m, this time I got really close to the top (2km) before the minivan found me. The top was decorated with prayer flags and was strangely warm, we must have been sheltered from the wind. Then we whizzed down the mountain to have lunch looking along a valley bordered by snow capped mountains. It was another 40km to the campsite as the normal one had been washed away by the excessive rains. We camped next to a turquoise reservoir, a beautiful waterfall and an abandoned village. There were even belemnites on the ground! During the day we saw men spinning yak wool and lots of birds including choughs with red beaks.
Today we set off in the rain and went over Simi La (I got right to the top!) and then it was all down hill to Gyatse. The fields here are still full of barley and there are people pottering about in their horse drawn carts. The streets are filthy but somehow feel a lot more authentic than Lhasa. We walked up to the Pachu Monastery which has one of the last chortens left untouched in Tibet but there are no monks and very few pilgrims. The chorten is beautifully decorated and has a great view over the town towards the Dzong (fortress). Tonight we're in a hotel (with showers!!) and tomorrow we cycle to Shigatse for two nights in a hotel and our rest day, but its 90km away on the flat so some effort is required to get there. Its also another 150m below where we are now so hopefully that will be good!
Posted by laughing snail at 10:39 am 1 comment: Links to this post