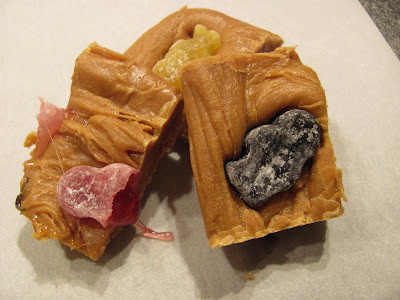 This afternoon we went for a little potter down to Webs of Wychbold and while browsing through their food department I discovered they were selling fudge covered in jelly babies. Now I thought that sounded like a good idea and having a can of condensed milk in the cupboard I thought I would try and make something similar. Never having made fudge before I found a recipe online and once the fudge was ready and poured into the tin and applied a whole bag of jelly babies to the top. A couple of hours later and the whole thing was set. I sliced it up and Nick and I tried a piece out. Delicious! The fruity flavours really add an exciting twist - but the jelly babies were still really runny - and so the whole experience was rather sticky!! Speaking of which I must finish off the washing up!
Posted by laughing snail at 7:25 pm 2 comments: Links to this post 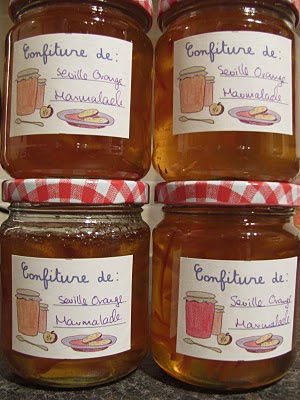 Whilst we were away, I found some Seville oranges in Wilton. So I thought I would knock up some marmalade - very simple: I put the oranges (about 7 I think) into a casserole dish, covered them in water and baked them for a couple of hours. Then I cut them in half and scooped out the insides and threw that back into the cooking liquid. I brought that to the boil and boiled for 5mins. Then I sliced a few of the oranges thinly, I like not too much peel. I strained off the bits out of the cooking liquid and returned the liquid to the pan. I added sugar (500g to 750ml liquid) and the sliced peel, brought it to the boil and waitied til it 'jammed' (about 118C). Then all that remained was to put it in sterilised jars! Yummy!
Posted by laughing snail at 8:22 pm 1 comment: Links to this post 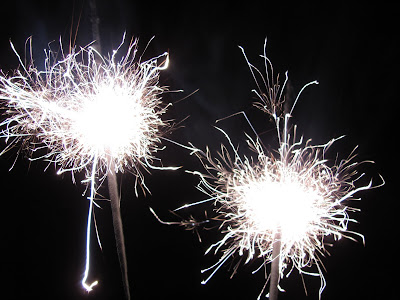 A few sparlers from a lovely few days at Dinton Mill near Salisbury.


And here's our delicious New Years Eve dinner, handmade of course!
Posted by laughing snail at 9:30 pm No comments: Links to this post