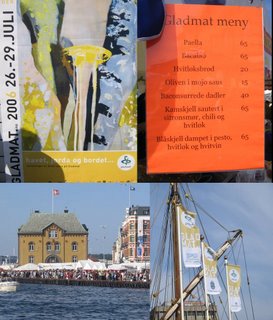 Last week I spent a wonderful few days in Norway with Dougal, Wampe and Rolf. We headed off to the hills straight from the plane in the blazing sunshine. Having completed the Kjerag bolt and been on a couple of shorter wanders over a couple of days, we headed back into Stavanger for the food festival - Gladmat (which literally means happy food in Norwegian). 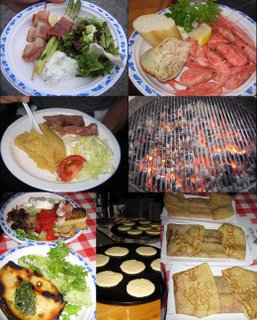 It took us three trips to get round most of the stalls but even so we couldn't sample anything - though we had a jolly good go. The first evening we tried scallops, giant prawns, norwegian pranws in great piles, hardanger lamb with nutmeg infused mashed root veg, italian antipasti, calzoni and crepes filled with deliciously sticky strawberry jam and chocolate sauce...... in fact we could hardly move by the end of several hours of feasting and gently pottered home through the dispersing crowds. 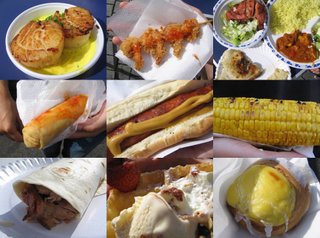 To increase our apetites on Saturday morning we spent a couple of hours kayaking round Stokkavatnet in the glorious sunshine. And so it was with empty tummies that we headed once more to the harbour for lunch - more scallops, vietnamese prawns and spring rolls, tandori and curry with naan bread stuffed with cinnamon and drizzled in garlic butter, sausages, barbequed corn, Craig's BBQ sandwich (which was in fact a wrap containing BBQed pork), waffles and custardy pastries (which I think might have been called sunbreads). 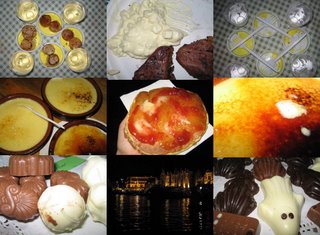 After lunch we strolled back through Gamle Stavanger and had a sit down on Dougal's balcony - a much appreciated rest. Then later on we went and caught the final couple of hours at Gladmat, this time only having room for scallops and barbequed pork with some creme brulee to finish. And just because we were in Norway we had a tradtional pancake with lashings of strawberry jam. The food festival was fantastic, though I shall have a slightly enlarged waistline for a while, I would highly recommend a trip to Gladmat 2007! 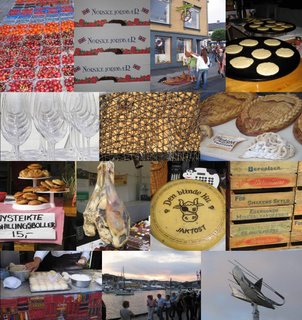 Posted by laughing snail at 5:01 pm No comments:

The happy sound of sheep bells in Fidjeland.
Posted by laughing snail at 5:45 pm 1 comment:

Orkney and Shetland by thigh power 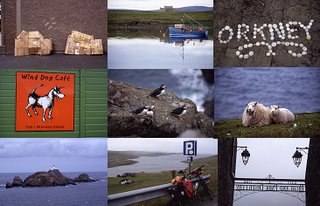 These are just a selection of photos from our trip to the very north - in fact the picture in the bottom left is Muckle Flugga and you can't go much further north in the Bristish Isles than that!! The participants were John and his bike Marion (she's a Marin) and me and Whistler (he whistles in the wind!!! and there was plenty of that) and we peddled 400 miles around the two archipeligos. While everyone was sweating throught the summer weather back in the south we enjoyed gorgeous 20°C weather, though there was a certain amout of sweating - particularly uphill and on occasion downhill into the wind!!!
Posted by laughing snail at 6:17 pm No comments: