I have been searching the IMBB site the last couple of weeks expecting to find something on the latest IMBB event - I usually start a little late on this!! But I always want to take part. And it is only this afternoon while I wait for my Western blotting to finish at work (yes I am 'weekend working' which is why there has been such a lack of blogging of late - the joys of having a job during the week and doing my own research in my spare time) that I found that I had completely overlooked that IMBB had joined with Wine Blogging Wednesday and that I have missed it!! Whoops!
Posted by laughing snail at 6:23 pm No comments: Links to this post

Me and My Girl

As it has been just over a year since I started blogging on Hecticium it has also been a year since the last show by the Queensbridge Musical Theatre Company. So last night I found myself sat next to John in Solihull Library Theatre once more feeling immensly proud of young Paul as he took the lead in Me and My Girl. And what a performance he gave - he had us laughing our socks off once more!!! Fabulous!
Posted by laughing snail at 6:15 pm No comments: Links to this post 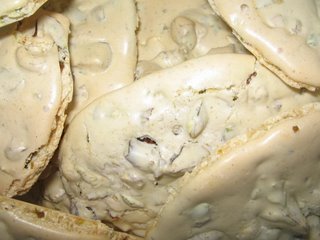 Today is Helen's and Anna's 30th Birthdays! They both caused great panic on Tuesday when they announced that they weren't going to be coming into work today. So there was a flurry of late night activity in my kitchen as I knocked up a batch of these yummy meringues for them and I gave them to them yesterday. The recipe comes from Joanna, who I met at the blog party at Christmas, and is exceptionally simple. I used my new mixer to whip egg whites for the first time and mustn't have been quite patient enough as the mixture was a little sloppy and so ended up with meringue cookies, which were delicious nevertheless!

Whip the egg whites to stiff peaks and then gradually whisk in the sugar. Then stir in the nuts and fruit. Put dollops onto a baking tray and cook for 1 hour at 100°C and then leave in the oven overnight. Couldn't be easier!!!
Posted by laughing snail at 9:21 am No comments: Links to this post 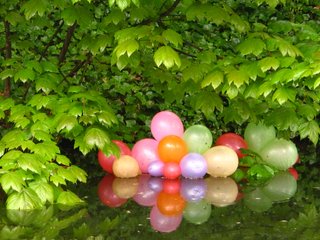 As I cycled along the canal in the rain I came across this 'water sculpture' and thought (fleetingly) that I was in for a treat - that Chihuly had come to Brum to excite our eyes with a display on the canals. Sadly there were on two clusters and the second was deflating rather fast in the rain.
Posted by laughing snail at 9:25 am No comments: Links to this post 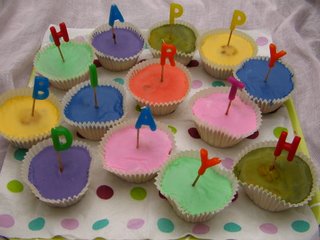 I can hardly believe that I have been blogging for a year!
Posted by laughing snail at 5:03 pm 2 comments: Links to this post