After finding the 1696 article on medicinal uses of chocolate I was chatting with Kira in the coffee room at work. We got to a point where we decided that may be we should try feeding chocolate to adipocytes (fat cells), though now I can't remember what all the connections were. Naomi is an expert on adipocytes and kindly said that we were welcome to use some of these cells that she would extract from stored tissue. The aim would be simple, we'd incubate the cells in the presence of some chocolate and hopefully they would expand in size as they took in the fat from the chocolate. A nice circular idea whereby the cells, which had been discarded to remove 'fat' would get fed fat. Kira was also interested in embellishing them with gold or other precious objects. After some research I reckoned that the easiest way was to add so cationic gold (positively charged) that would adhere to the outside of the cells through an electrostatic interaction as the cells are slightly negatively charged. Rachel generously said we could visualise them on the scanning electron microscope (SEM) too, which meant we'd be able to see the gold and the structure of the cells.

So first off Kira and I spent the afternoon trying to get chocolate into solution. I had hoped that just warming it to 37°C would be OK but this had a tendency to sit as gloop at the bottom of the tube. After a lot of fiddling we decided upon grating some high cocoa solids content chocolate (85% Green & Blacks in these experiments but later Kira sourced some French 100% from Cortes Ingles in Valencia) and melting and mixing it into standard serum supplemented media. 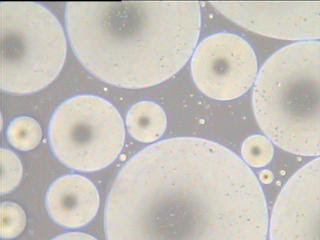 Then Naomi kindly supplied us with some cells, but the transport between labs caused massive infection and they all died, so we decided to go to them and spent a couple of days over at Aston. We helped to process the tissue and extract the individual cells before adding the chocolate solution. We gave them an overnight incubation to see if they would take up any fat. The next morning the chocolate stimulated cells certainly looked different from the non-chocolate stimulated ones, but it was more that they had a fine coating of particulates rather than having swelled in size.

To add the gold we had to tether the cells. They were floating atop the liquid in which they were growing so using poly-D-lysine coated coverslips (making use of electrostatic interactions again) we captured the adipocytes. Once isolated we coated with the gold solution, taking only 10min, before fixing in preparation for the SEM. Further dehydration was required, as the SEM works under partial or near vacuum, before we could 'see' the fat cells. Rachel and I had a quick look-see under the low vacuum instrument before using the higher powered one over in the microscopy suite with Naomi. And ta-dah!!! We found lots of things, mostly bits of chocolate particulate but also a fat cells that had adhered and then subsequently lost most of its cell contents. It looked like the nucleus had been ripped from the cells, looking like a fried egg missing its yolk. Using back scatter electrons we could also see the gold - looking like constellations sprinkled across the membrane! 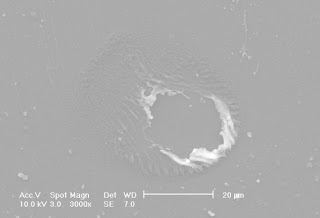 So what does all this mean I hear you cry? Well, according to Naomi, its the first time anyone's tried to visualize adipocytes under SEM and hopefully we can use further experiments to characterise these cells. So from a scientific point of view this 'Friday afternoon experiment' has been incredibly useful. On other fronts, this has been totally mind blowing - I've never used such high powered microscopes before and seeing a cell in such high magnifications is really quite something, and add in the gold stars/sparkles and I'm very excited! So the cells didn't do what we expected, but then as Prof Einstein said 'If we knew what we were doing it wouldn't be research' and as such trying something different has brought out something new and exciting, not to say broadened all out horizons. 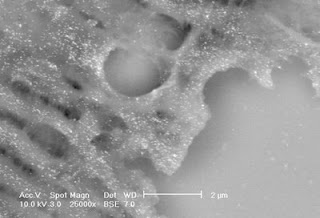 Magnification of the mambrane using back scatter electrons to see the gold labelling, like little stars
Posted by laughing snail at 2:27 pm No comments: Links to this post 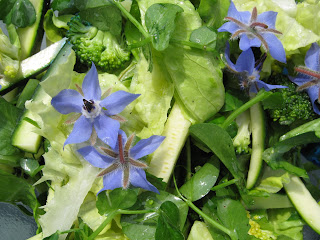 To accompany or BBQ on Sunday I picked some pea shoots and borage flowers to go into the green salad, I just need the courgettes, cucumbers lettuce and beans to be ready at the same time and then everything will come from the garden!
Posted by laughing snail at 4:02 pm 1 comment: Links to this post 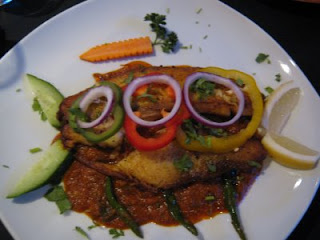 My favourite curry restaurant in Birmingham - the Sylhet Spice Cuisine in Kings Heath - just yummy! This was Nick's fish dish on Friday night - complete with chilli 'green beans' ala Dougal on the Bramaputra!
Posted by laughing snail at 4:04 pm 1 comment: Links to this post 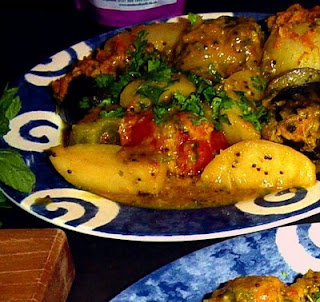 This month the evolution baton passed to fellow food blogger Sabine of A lot on my plate who has summarized the progress so far and made a fantastic contribution with Aku Shaak - stuffed vegetable curry. Go and read her blog entry for more info!
Posted by laughing snail at 12:28 pm No comments: Links to this post

Some lovely foodie pictures from our Gothenburg trip!
Posted by laughing snail at 2:21 pm No comments: Links to this post 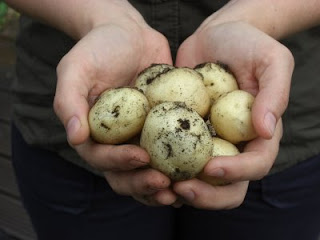 Today we dug up the first of our potatoes - variety rocket - that we planted back in February in a big pot in the garden. They were delicious made into a Spanish omelette!
Posted by laughing snail at 9:05 pm 1 comment: Links to this post

It was Dougal's birthday at the weekend and Soazig organized a surprise - that we would all meet up in Dublin and spend the weekend staying at Ballyknocken cookery school. We couldn't have been more lucky, the weather was magnificent and the food was fantastic. Late on Friday night we tucked into tapas in Al's Diner in Wicklow and then snuggled down in the very comfortable hotel, to be greeted the following morning by the chucks and brilliant french toast at breakfast. Then a whistle stop tour of the region, calling in at Glendalough and Powerscourt. The back to the cookery school where Catherine created beautiful antipasto, potato and lemongrass soup, pork tenderloin with stuffing and polenta cake. 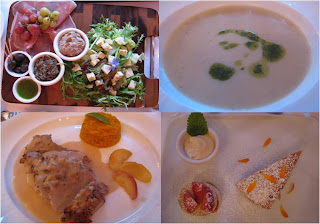 The following day we celebrated Dougal's birthday with another splendid breakfast, followed by a walk along the coast from Bray to Greystones, in the sunshine, we really didn't need lunch but had ice creams on the beach. Then to Bates in Rathdrum, behind a lively Irish pub, for a delicious locally inspired dinner - Wicklow crab ravioli, Dover sole, lamb and creme caramel with orange sorbet! 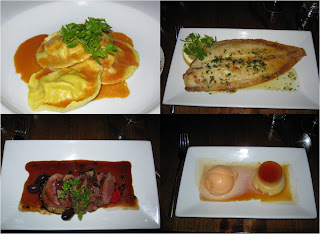 Our final day took us back to Dublin to the Guinness Storehouse and a little Guinness tasting, and to Trinity to gaze at the Book of Kells and the evocative Long Library.
Posted by laughing snail at 9:07 pm 1 comment: Links to this post