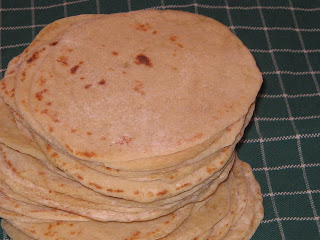 Petra is hosting bread baking day this month and the theme is flatbreads. I instantly thought of these fantastic Norwegian Lefse which we always have when we go and visit Dougal in Stavanger. I had a little root about and found that to make them all you need to do is to make mashed potatoes and add enough self raising flour to make a dough! What could be easier and it was incredibly simple! Everyone in the lab is now enjoying them with a little homemade bramble and apple jam and cream, though I also really like them with a little sugar and cinnamon.

Boil the potatoes until soft, drain and then mash with the cream and butter until very smooth. Then add enough self rasing flour to make a smooth, non-sticky dough. Divide the dough into 32 portions and roll out very thinly. in a dry frying pan or on a griddle toast each lefse until lightly freckled on each side. If you have a bigger frying pan or griddle you may be able to make bigger ones just divide the dough into fewer portions. I made mine the night before eating them and I think they would freeze well too.

You can eat them with pretty much anything, including the dreaded Lutefisk!
Posted by laughing snail at 11:14 am 2 comments:

A little bit shaky without a tripod, this was a really wonderful way to spend our last morning, even though it involved being up at 4.45am!! 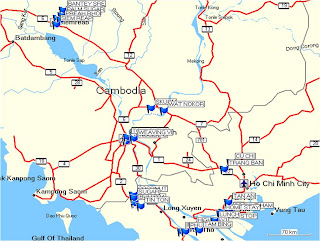 Here's a preliminary map of where we went! I am still fiddling with Google Earth to get a map and then it'll be a little bit more interactive!
Posted by laughing snail at 10:23 am 1 comment: