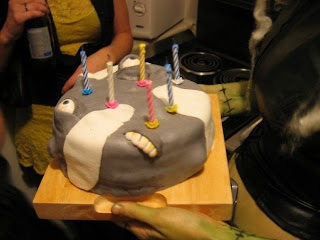 Just a plain sponge with lime curd inside - but I went a bit wild with the decorating! Happy Birthday Katie!
Posted by laughing snail at 3:17 pm 1 comment: Links to this post

Friday night at the jazz

Early Friday evening
Picking up a muffin and hot choc
On the way to the jazz
The glow of the evening light fills the eyes
Pink fluffy clouds linger in the sky
Orange lights flicker on across the square
The unexpected notes
Untangle the week in my mind
The euphoria of Friday night seeps deeper
Posted by laughing snail at 4:02 pm 1 comment: Links to this post 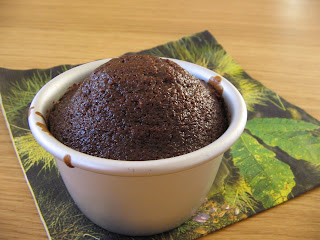 We're having a wee cake fest at work today - many people have brought in home made cakes - Kim brought orange chocolate muffins and Ania brought Polish cheesecake, I whipped up a little ginger bread:
Sift into a bowl 250g self raising flour, 2 teaspoons ground ginger, 1/2 teaspoon cinnamon, a few gratings of nutmeg and a teaspoon of bicarbonate of soda. In a saucepan melt together 200g black treacle, 2 tablespoons syrup from a jar of stem ginger, 125g butter, 125g dark muscavado sugar, zest of an orange, 110g raisins and three pieces of stem ginger that have been chopped. Once everything has melted then bring it to simmering point. In another bowl mix together two eggs and 250ml milk. Finally beat the sugar mixture into the flour and then mix in the milk mixture until everything is combined well. Pour into a greaseproof lined loaf tin and cook in a pre-heated 170°C oven and cook for 35-40min until a skewer comes out clean. Exceedingly good fresh with vanilla ice-cream or a few days later when it has matured.
The little one in the picture was left over mixture that wouldn't fit in my loaf tin and was baked for as long as the loaf alongside it.
Posted by laughing snail at 10:20 am No comments: Links to this post 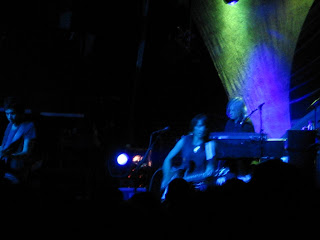 The Guillemots at the new Town Hall

Yesterday was a rather fabulous day - not only did I get to hear the charismatic Jeremy Niven talking about energy trade off in neurons but I also got to go and see the Guillemots live in the newly refurbished Town Hall in Birmingham. Fyfe Dangerfield had written a new piece for the CBSO, which we heard in the first half - all fantastic contemporary type stuff with amazing technical string movements, the cello solo was really quite something. The only thing that was disappointing was that the programes were £5 which I felt weas a bit steep so I wasn't entirely sure of what was going on. Then in the second half the rest of the band came on stage and we were treated to a fantastic set - the finally of Sao Paolo with Fyfe legging it up to play on the organ was just spectacular! My head is still ringing to the sound..... thrown across the water.......I love you through sparks and shining dragons.....
Posted by laughing snail at 10:42 am No comments: Links to this post 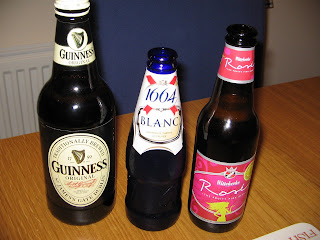 I had a crazy idea whilst having dinner with Anna and Anthony a wee while ago - how about combining cheesecake with beer. We discussed the merits of various brews and decided that Guinness was a must but also something fruity. Anthony suggested heather beer from Scotland but as I haven't been north for a few months I didn't manage to get hold of any. However on my recent trip to Zutphen I picked up some very fruit Rose beer and Sarah and Juul donated a bottle of coriandery Kronenberg blanc. All I needed was a suitable recipe to administer beer to and I was away. Looking through my cookbooks I found Nigella's passionfruit cheesecake - a baked cheesecake that had a substantial volume of liquid added to the mix. So this was the one. Having whisked up the cheesy mix I then separated it in to three and added a little beer, a little taste and then a bit more. Finally into the oven, fingers crossed that they would cook and end up like cheesecakes and not as scrambled eggs. And they did and they taste pretty good too, currently I have the lab tasting them - so far the only comment has been beery!


At the beer adding stage. 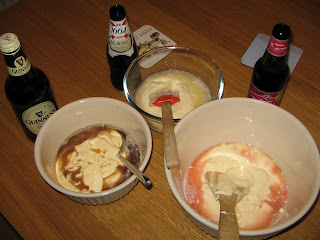 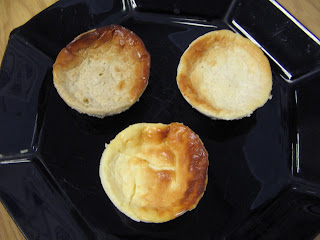 
First blitz the biscuits to breadcrumbs and add the butter and whizz again. To make little ones add a dessertspoon of this mix to each mould of a silicone muffin and press down. Put the muffin mould into a baking dish that you can fill with water.


Preheat the oven to 170°C. To make the filling beat the cream cheese in a bowl until smooth then add the sugar and beat in. Add the eggs and yolks mixing them in one at a time. Stir in the cream and lemon juice. Then split the mixture into three. Add 100ml of beer to each - three different beers for a taste challenge. Stir in gently, there will be lots of fizzing. When completely mixed leave to stand for 10min. Put the kettle on. Carefully spoon the mixture over the biscuit base. Pour the water from the recently boiled kettle into the baking dish under the muffin mould. Carefully transfer it all to the oven and bake for 1hour. Carefully take it out of the oven and remove the mould to a cooling rack. Leave to cool and then refrigerate overnight. Unmould by running a palette knife (nothing sharp!) around the individual cheesecakes and then pushing the mould up from the bottom. Enjoy!
Posted by laughing snail at 10:46 am 3 comments: Links to this post 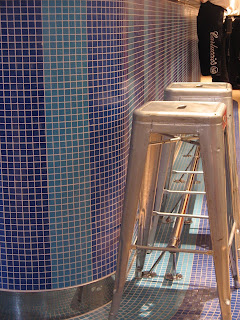 Dougal came across sans crutches for another fabulous weekend in London. Starting off with a spot of shopping in Covent Garden and then heading to Le Pain Quotidien for tea before going to see The Emperor Jones at the National Theatre. I was really surprised (though shouldn't be) that there was Friday night jazz there too! Paterson Joseph was fantastic as Brutus Jones and the set was brilliant - especially in the boat scene, it was like the whole theatre was in the swell. The music was fab too - lots of wild drumming! Its on until the end of the month so still plenty of time if you fancy going to see it. More shopping on Saturday and then a walk at Wisley on Sunday to see the Surrey sculpture club exhibition - brilliant but it was the last day so until next year.
Posted by laughing snail at 2:13 pm No comments: Links to this post