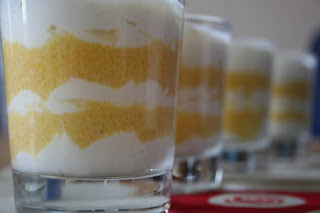 I just found this picture on my draft list on the blog - it was a tasty recipe - cream and peaches but I can't remember how I made it - nice pic though!

Posted by laughing snail at 3:42 pm No comments: Links to this post

At the beginning of February I packed up my bike, Whistler, and headed for London and then on to a plane head for Vietnam. There, luckily Whistler arrived in one piece and I met up with a great crowd of folk for a cycling holiday that would take us from Saigon (Ho Chi Min City) through the Mekong delta and then up to Cambodia and from Phnom Penh to Siem Reap, finishing with the spectacular temples that include Angkor Wat. This video is made up of sereval clips I took whilst cycling. The first three are from Vietnam and then we head into Cambodia, first along some busy roads out of the capital and then along more rural roads and finally through the South and North gates of Angkor Thom. The sound is just what I picked up a dn rather than put a tune over it I decided that just the vague clips of the bike and the strains of music as we came past a festival were more atmospheric.

Posted by laughing snail at 9:52 pm 5 comments: Links to this post