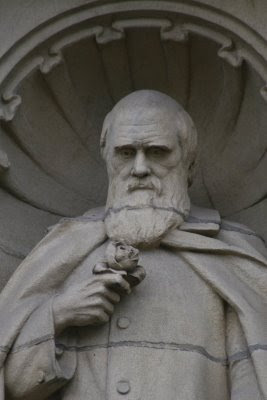 As I mentioned the department are having Darwin talks - and every time someone starts they show their University's image of Darwin. Just as I was wondering if we had one, Buzz (Uni newspaper) dropped on my desk with a picture of Darwin in it. Of course, he looms above the Great Hall along with several other scientists of note - actually I didn't check, they might not all be scientists! Pottering along, I thought how am I going to tell who's who all that way up but they were handily labelled in gold paint and weren't so far up in the end! I think he's looking rather compassionate here - Watt and Faraday looked decidedly grumpy!
Posted by laughing snail at 4:22 pm 4 comments: Links to this post 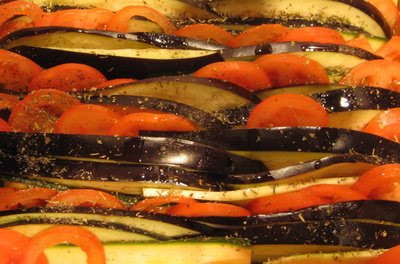 To kick off the Evolution project I had a good hunt through my cookery books and after contemplating several recipes I settled on this one from the Oven book from Albert Hein that Sarah and Juul gave me for Christmas. I think that it gives plenty of scope for future participants and was exceedingly tasty. In the kitchen last night were Laura, Nick and me! Laura and Nick did a fine job of washing and slicing the vegies whilst I translated the recipe (from Dutch). The recipe said it was good with rice so near the end of cooking we boiled some up and they were right - exceedingly tasty!! So who's next? We need a volunteer for February's evolution spot!

Begin by washing all the vegies and then slice them length ways to give long strips half a centimeter wide. Salt the courgettes and aubergines and leave for 10min to loose a little water, before patting them dry. Next line them up ('om en om') so that they are overlapping in a large dish - alternating between the different ones. Sprinkle with the herbs, splash over the olive oil and season with pepper. Cover in foil and bake in the oven for 35min. Meanwhile mix up the marscapone with a little salt and pepper. Then take the dish out of the oven, remove the foil and dot with the marscapone. Put back in the oven for 15min, without the foil and then serve!
Posted by laughing snail at 4:12 pm 6 comments: Links to this post

This year is the year of Darwin - all over the place are celebrations for his bicentenary. Here at the university we have a series of lectures mapping out how his therories of evolution have impacted on research. I was pondering various things with Kira in the coffee room - always a good place for a mad idea to fly - and wondered if we could try a little evoltuion ourselves. The idea was to start with a recipe and over the year let it evolve in our kitchens. The starting ingredients each time being what was used at the end of the month before, letting each cook decide what they are going to do and what they are going to change. So may be we'd go from french onion soup to an onion tart to a tart tatin......what ever the particular monthly volunteer fancied - taking the starting point and evolving it in some way. I could round up the changes here....so any takers? Contact me laughingsnail AT hotmail DOT co DOT uk.
Posted by laughing snail at 3:35 pm No comments: Links to this post 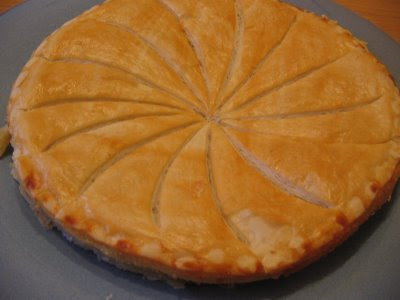 Yesterday I decided that I would make a king cake - a gallette de rois and so after work I called in at the supermarket for some supplies. As I went through the checkout the lass on the till asked if I was making a cake and so I explained what I was doing. She replied that she was from Goa and that they too celebrated with an almondy king cake! What a small world this multicultural city is! Back at home I creamed together sugar (125g), ground almonds (125g) and butter (125g) before adding 3 eggs and a tablespoon of quince vodka. I rolled out two large circles of puff pastry and spooned on the almond mixture on one before topping with the other, sealing the edges with egg wash. I brushed the top with egg wash too and left it to rest before baking for 30min (180°C). I mustn't have sealed it very well as soon I could smell it cooking and looking in the oven I discovered almond filling making a break for freedom! Nevermind it still tastes pretty good! I have brought it to work where it is being demolished by my co-workers - I left out the 'king' as I recon that someone would just eat it without realising the significance!

See more about King Cakes with Zorra at Kochtopf!
Posted by laughing snail at 10:40 am 2 comments: Links to this post