A fleeting trip, on Thom's first birthday, to see the eclectic Pitt Rivers Museum in Oxford, full of so many treasures, and even a cleft stick, though it wasn't on show, I found it in the catalogue! The wart medicine was fantastic - first find a black slug, then secretly rub it on your warts and then impale the slug on a thorn! Everything had gorgeous labels, another visit is a definite thing
Posted by laughing snail at 8:00 pm No comments:

A trip on the Metro 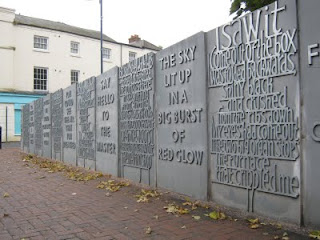 I took the Metro for the first time, up to Wolverhampton to the Art Museum to see their exhibit on Andy Warhol, which turned out to be not as interesting as the exhibits on Works on Paper and The Northern Ireland collection. On the way back I got off at Bilston to visit the Craft Gallery, which was brilliant. The travelling Playing with Fire contemporary exhibition was fabulous. Then to round things off I popped into the RBSA to see the Friends Autumn exhibition!
Posted by laughing snail at 7:53 pm 2 comments:

A quick blast along the Tissington Trail from Parsley Hay to Ashbourne and back, splendid countryside! Whilst having my lunch on a bench just outside Ashbourne Bet stopped for a chat, admiring my independent spirit, as she seemed to be staring into the face of an imminent loss of her partner at 73, we talked for a while and parted with a hug, I hope all goes well for her.
Posted by laughing snail at 7:52 pm No comments: 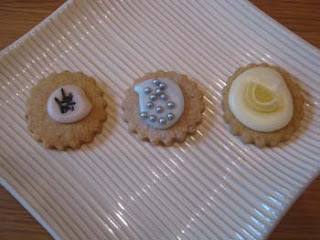 Posted by laughing snail at 3:05 pm No comments:

Over the bank holiday weekend I dragged Nick off to the north of England to cycle Hadrian's cycleway route 72. Starting off from Ravenglass, on the coast of Cumbria, we first visited Glennaventa roman baths and then cycled to our first campsite, battling the wind but enjoying dinner in Seascale. Then off north, along the coast past Sellafield, I had no idea it was such a big complex, and the BNFL owned their own trains. Onwards we came through Whitehaven, past the coast to coast marker and along the Solway Coast to Silloth, stopping at a Roman museum along the way. After our second night of camping we came to the start of the wall at Bowness on Solway, making it to Carlisle and hitting 100miles, but peddling on to Haltwhistle, in the rain, for our final camping spot, and a fine dinner in Rowfoot. The last leg took us across the Northumerland National Park and via Vindolanda roman fort and acheaological site, before peaking at 225m, followed by a glorious 7mile downhill run. Finally we cycled in to Newcastle under a threatening sky, and celebrated with a wee drinkie by the river before the train home, after a mere 195miles.

Dougal Pu me on to mapmy ride - and here is the approximate elevation for our trip!