140 years of the periodic table 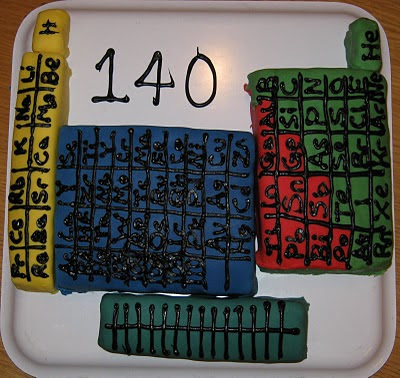 Catching up on reading Nature I spotted that it was 140 years since Dmitri Mendeleev came up with the first periodic table back in December. So to celebrate Nick and I have rustled up a simple sponge and decorated with icing for all the elements, though didn't quite have enough space for the lanthanides and actinides. It tastes very yummy!
Posted by laughing snail at 7:57 pm 2 comments: Links to this post

Walking in the snow 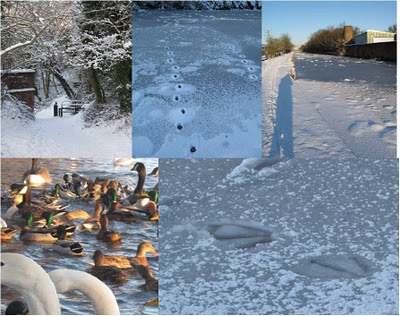 What will they think of next?

Not sure this is a great idea - chocolate probiotic drinks?!!
Posted by laughing snail at 8:49 pm No comments: Links to this post

Email ThisBlogThis!Share to TwitterShare to FacebookShare to Pinterest
Labels: chocolate

For New Year's Eve we had Vicki, Seb and Adrian round for dinner in a Mafia style party - all dressed in black and looking very swish! And of course a Mafia inspired menu to go with it!

This one was adapted from a soup book I have had for ages but haven't really used - shame on me! Its very yummy and well worth the effort.

pasta made from 1 egg and strong white flour, shapped as orrichette

fresh parsley and parmesan to serve

Roast the gammon and onions in a 200C oven, then trim off the excess fat and boil with the peppercorns, onion and bayleaf for 2 hours, uncovered, topping up with the water as you go, especially as 4 litres proabaly won't fit in one pan. Then remove the meat from the stock, keep the meat and strain the stock through muslin. Put everything in the fridge overnight.


The following day skim off any fat from the stock and shred the meat, removing any chewy looking bits. Fry off the new celery and carrots in the olive oil for a couple of minutes before adding the meat, tomato puree and chopped tomatoes. Then add the stock and simmer for 20min. Add the pasta and simmer for another 30min or until cooked. Serve with parsley, parmesan and seasoning. 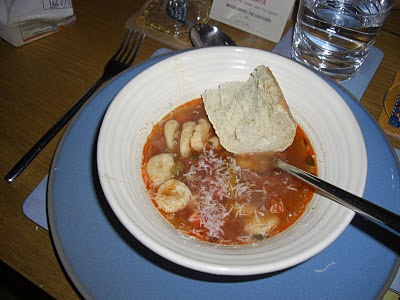 This was inspired by a recipe from The Kitchen of Light but we didn't have any vodka, so substituted white rum instead. We took a 1kg peice of beautiful matured sirloin and marinaded in for 3 days in 1tbsp coarse seasalt, 2 tbsp crushed black peppercorns, 3 tbsp chopped parsley, 1 tsp fresh thyme, 3 crushed garlic cloves, 100ml white rum and 70ml olive oil. It was roasted at 200C for about 50min (though 40 would proably have done for a rarer roast) and served with yummy roasted potatoes and crunchy green beans. 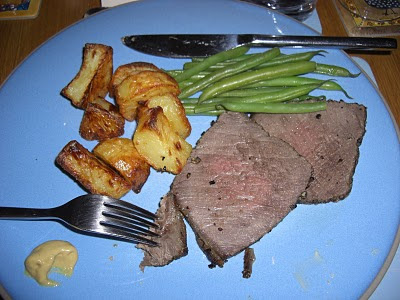 Bombino! A melon wrapped in black icing to look like a bomb! 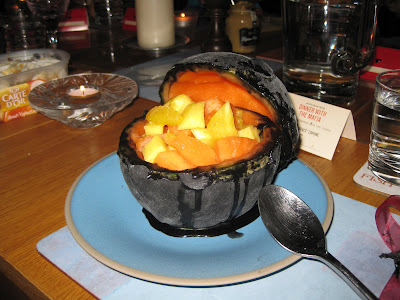 Posted by laughing snail at 3:21 pm 2 comments: Links to this post