Look at them sizzling away

I have just cracked the fine art of loading a video! And so as promised here are the olieballen sizzling away! Thanks Wampe for the voice over!!
Posted by laughing snail at 1:54 pm 2 comments: Links to this post 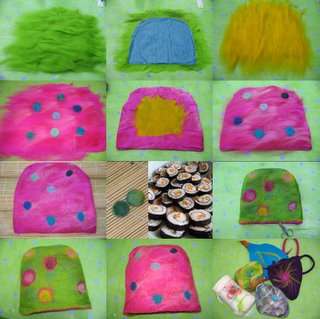 Way back in Novemeber when it was Mum's birthday I booked for us to go on a felt making day with Gillian Harris and today was the day that we went. Just 20min down the road, in the snow we arrived at Gillian's house - marked by a felt sign on the door. After a cup of tea and introduction to our fellow novice felt makers Gillian demonstarted how to make a little bag - and it only took her what seemed like 10 min! Mum and I chose to make tea pot cosies while the others set to on hand bags. First a design for the inside - I didn't capture that on the camera but its under that green layer of fluff! Then the background colour for the inside - the green wool! Then a lot of water and soap to start off the matting process under a piece of netting. Over on the other side of the plastic template I repeated the pattern and more greenery and more rubbing. By this time the ginger biscuits were out - definitely needed as the rubbing was hard work. Then a middle layer of yellow wool in the opposite direction to the green, more rubbing and a final pink layer with a pattern. Then lots of soap and lots of rubbing to hold the fibres together. All the wool I used was merino, which felts quite quickly but Mum chose a Jacob's sheep wool which took a smidgeon longer.
Then it was time for a spot of lunch - delicious vegetarian sushi with hot hot wasabi followed by chocolate brownies! I tried my hand at making some felt balls and then we were hard at it again felting the tea cosies and handbags with hot and cold water and rolling them in bamboo blinds - not to be confused with sushi mats! Finally the moment arrived when I could snip through the pink continuous outer and cut an opening for the teapot. The yellow and green layers were revealed, along with the original pattern on the green that I had done earlier, I couldn't remember what it looked like so it was all rather exciting. More rubbing and washing and the tea cosy was finished! All in a few hours - what fun!!!
Posted by laughing snail at 6:04 pm No comments: Links to this post

Last night, after a little secrecy, I took J to see Jools Holland and his Rhythm and Blues Orchestra! First we went to The Rectory in St Pauls Square for a very tasty tea. Over the other side of St Pauls Square we headed into the Jam House where Jools Holland is the musical diector. It felt like we were being ushered into someone's front room as they greeted us at the front door. Inside the floor around the stage was filling up with folk and we took up our bit of the floor. We had to wait til nearly 10 before the Orchestra got onto the stage but it was worth the wait. Jools played away furiously and we were treated to solos from all of the band in the next hour - all 5 saxaphones and trumpets and trombones!!!! And to add icing to the cake we also got to hear Sam Brown and Ruby Turner sing! Brilliant night!!
Posted by laughing snail at 12:18 pm 1 comment: Links to this post 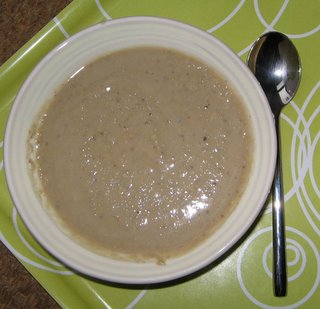 Ivano also sent me the ingredients for this fabulous soup. The chickpeas and chesnuts came dried, as did the onion and garlic. The bay leaves are the most fragrant I have ever smelled and the extra virgin olive oil is exceptionally fruity. I am lucky that there is enough of the last two ingredients to enjoy in further feasts! Many moons ago whilst studying for my PhD Dennis told me a funny story about soaking pulses overnight for a casserole. After filling all his bowls with peas and beans of various descriptions and covering them with water he pottered off to bed. The next morning he came into the kitchen to find swelled peas and beans flowing across surfaces as they had expanded in volume in the night. (I like to imagine a sea of them across the floor to.) So it was with great trepidation that I selected my biggest bowls in which to soak my chickpeas and chesnuts overnight. And though the chickpeas reached the edge of their bowl, there was no overflowing!

Soak the chickpeas and chesnuts overnight. Fry the onion and garlic until soft and then add the drained chickpeas and chesnuts. Cover with water and add the bay leaves. Simmer for 2hours or until chickpeas and chesnuts are softened. Then blend the soup - this needs to be done in batches and extra water can be added if the mixture becomes too thick for the blender. Warm the soup through and season with salt and pepper. Finally stir through the cream.
Posted by laughing snail at 9:20 am No comments: Links to this post 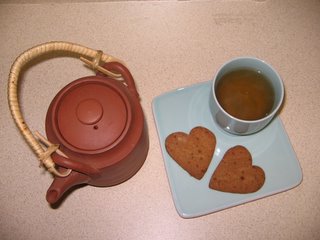 Last month I received a parcel from Italy for EBBP. And eventually this weekend I have had a moment to make one of the recipes enclosed. Ivano had sent the ingredients and recipe for Cookies against the bitterness of Hildegard von Bingen. After a little searching I have found these are also called biscuits of joy because and I quote:
"Eat them often and they will calm every bitterness of heart and mind - and your hearing and senses will open. Your mind will be joyous, and your senses purified, and harmful humours will diminish..."
Hildegard von Bingen (1098 - 1179) was an amazing woman and wrote two books on medicine and natural philosophy. She particularly liked spelt:
"The spelt is the best of grains. It is rich and nourishing and milder than other grain. It produces a strong body and healthy blood to those who eat it and it makes the spirit of man light and cheerful. If someone is ill boil some spelt, mix it with egg and this will heal him like a fine ointment."
which is a distant cousin to modern wheat. It has a a harder husk and this, now a days, is thought to protect it from many pesticides.
Other ingredients in the recipe are nutmeg, cloves and cinnamon and brown sugar - all of which arrived in my parcel. I ground the cinnamon and cloves myself and grated the nutmegs, which made the kitchen smell very delicious even before I had started cooking in earnest.

Mix all the dry ingredients together and then rub in the butter, as if you were making pastry. Lightly beat the egg and then use to bind the dough together. (I'm sure this could all be done in a mixer if you have one) Then put the dough in the fridge to rest for about an hour. Roll out and cut out the biscuits - there should be about 75! Cook on lined baking sheets for 20min at 160°C.

I ate a couple of biscuits with the smokey lapsang souchong tea with orange zest, cloves and cinnamon that Ivano sent too. I can't say whether there was a generally swelling of joy on just one eating so I shall have to keep eating them!!!!
Posted by laughing snail at 10:34 am 1 comment: Links to this post