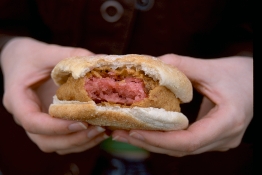 Over the bank holiday weekend I went home with Sally to Carrickfergus. We had a fabulous time doing all the touristy things - shopping in Belfast, visiting the Giant's Causeway on the north coast and catching the raft race in Portrush. I even got Sally to see the Beaghmore stone circles ove near Cookstown, which she didn't even know were there! There are seven circles uncovered, all paired, save one which is filled with 800 smaller stones called the dragon's teeth. This is totally unique and, to me, was quite a surprise. We also got to visit the Mountians of Mourne taking a walk through the Donard forest up past the ice house and to the saddle between Slieve Donard and Slieve Commedagh.
Whilst away I was introduced to Northern Irish pastie. Now, I thought it was a mashed potato patty that had been battered and deep fried. But no! I find that it is in fact a pork and potato delight! Sally took me to the Victoria Hot Spot for a pink pastie - there was slight confusion before we arrived as I thought we were going to a shop called the Pink Pastie! But pink they are - and that's Beth's pastie bap!
I am intriguied by the diversity of pasties around the world. I encountered this new form in NI but there is, of course, the good old Cornish variety and also the very tasty empanada which I enjoyed greatly in Chile! There is a wealth of info on the history of pasties - they were a good way of taking food with you all in one package, in the days before lunch boxes. And would you know it there is even a band called the pasties!
Posted by laughing snail at 9:19 am