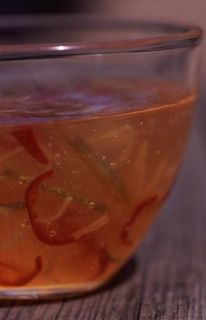 Since joining the wonderful blogging world I have found the fabulousness of the food blog - there are lots out there and I am sure to mention some of them in the future. I became aware that there is a shared event about once a month called Is my blog burning? a fantastic invention of Alberto of Il Forno . So when I saw that this month the topic was 'Has my blog jelled?' (hosted by Elise of Simply Recipes) I just had to join in. Last month on a wee trip to Evesham I bought 6Kg of rhubarb and made a rather soft jam - very tasty but with a tendency to slither off the knife (or spoon - I have taken to eating out of the jar on its own!). So in order to get the set right I purchased a sugar thermometer yesterday morning, along with 16 limes, a bag of 6 unwaxed lemons, 5 red chillis and a hand of ginger. I fancied having a go at a 'savory' jelly. My last lot of lemon marmalade set like iron so I thought I would be in with a good chance of set jelly.

I squeezed the juice from 14 limes and 2 lemons. This came to about 500ml of liquid, which I put in my heaviest based pan (an iron casserole) along with 750g jam sugar and gently dissolved the sugar. Then I brought it up to a simmer, added the shredded zest of half a lime and waited until it got to 105°C on the thermometer. I also checked if the jelly would set on a plate, which it did. It must have taken about 20min, then threw in three deseeded and shredded chillis and about a thumbs worth of ginger, peeled and shredded too. Stirred the strands through and then ladled the hot syrup into sterilized jars, that had been washed in hot soapy water, rinsed and baked in a 100°C oven while I was making the jelly. I now have 5 beautiful little jars on fairly fiery jelly sitting on my window sill (though they'll go into a nice dark cupboard soon) that has set perfectly.
Posted by laughing snail at 9:57 am

There's nothing better than homemade jelly. These look delicious!

what a lovely combination! sounds yummy.